A 120-year old Turtle Lake area farmhouse was destroyed by fire Thursday evening, March 5. Cause of the blaze is still under investigation.
At 11:44 p.m. the Turtle Lake Fire Department was dispatched to the 2-story stucture fire at the Dale Hellstern residence on the south side of the village. Eight minutes after being paged the fire department arrived at the Pine Street South location and found the farmhouse fully engulfed in flames.
In an attempt to battl 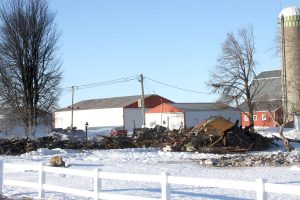 e the flames, which were being fanned by a wind that reached 25-mph gusts that continually fueled the fire, the firemen began fighting the blaze.
“We set up two engines, pulled five hose lines and used the aerial truck as a master stream int he suppression effort,” Fire Chief Brock Molls said. “Water was being pulled from a nearby hydrant, along with tankers filling at the hall. Within fifteen minutes of being on scene the house had already collapsed,” he added.
With efforts in saving the structure exhausted an excavator was eventually brought in to remove portions of the house the firefighters could not access. 18 firefighters, along with 7 fire trucks, responded and were on scene for more than six hours.
While both occupants exited the house safely with only the clothes they were wearing, a cat and a dog were lost in the fire. The Red Cross was contacted to assist the residents.
________________