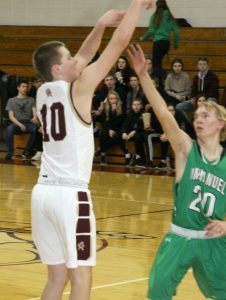 In a game that featured 11 first half lead changes the Lakers boys suffered through an early second half drought that brought their 2019-20 season to a end in the second round of the Division 5 playoffs against the Eau Claire Immanuel Luth-eran Lancers Friday night in Turtle Lake. The Lakers entered the game as the #4-seed while the Lancers came in as the #5-seed.
Casey Kahl, who had a fantastic two-game run, led the Lakers with 21 (47 points combined).
The two teams traded baskets throughout the first half. During the eleven lead changes the Lakers were out front on three separate occasion. Their largest lead was two points. The Lancers had three 3-point leads early in the contest and a five-point advantage just before the half.
The Lancers jumped out to a 3-0 lead on a Ryan Zimmerman three. Zimmerman had 16 for the game.
The first Laker lead came following a Blake Thill three, making it a 9-8 score. The Lancers responded with an Isaiah Plath two. Lucas Torgerson restored the Laker lead with a two, and once again following a Zimmerman freethrow.
Kahl hit a pair of driving layups and Roy Davis added one of two charity tosses as the Lakers held an 18-16 advantage with eleven minutes to go in the half.
Zimmeran and Plath knocked down back-to-back baskets to put the Lancers back on top before a Thill three at the 7:45 mark knotted the contest up at 21-21.
The final Laker lead came on a Torgerson three with 6:57 to go, giving the locals a 24-23 advantage. The two teams traded baskets until the Lakers hit a deuce and a three for a 36-31 lead. T 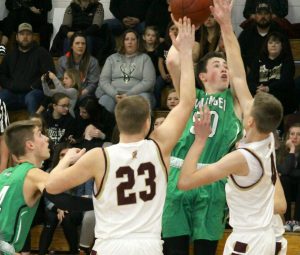 hill’s three before the half pulled the Lakers back to within a pair, 36-34.
Thill’s three to start the second pushed the Lakers to that one-point advantage. Then the proverbial roof caved. The Lancers went on a 15-2 run, the lone Laker basket coming from Brendan Strenke, to stretch their lead to 51-39 at the 10:56 mark.
A Strenke two stopped the run but the damage was done. The Lakers got to within eight, 56-46, following baskets by Kahl and Torgerson, but that was the last time the Lakers were within double figures of the Lancers. Immanuel Lutheran sealed the deal from the freethrow line, hitting 13 of 14 opportunities in the final two minutes of the game, securing the 81-64 win.
In addition to Kahl’s 21, Lucas Torgerson added 17 and Blake Thill chipped in 14.
Zimmerman and Ben Oster led the Lancers with 16. Paul Schierenbeck added 14 while Isaiah Plath chipped in 12.
________________ 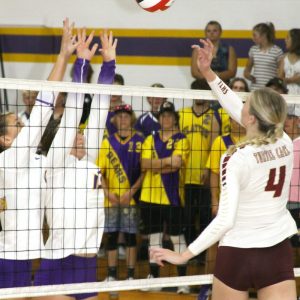