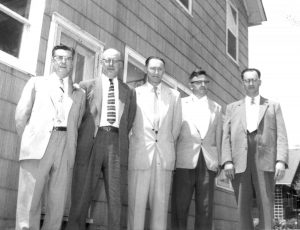 In last week’s photo we received a few responses. The two unidentified managers in the 1967-68 Laker basketball team photo are Greg “Oscar” Ranallo (front row left) and George Hansen (back row left). The Lakers tied for the conference championship with Clayton and Clear Lake. They won the District and in the Regionals they upset Osceola, but lost to New Richmond in the Regional final, just missing a trip to the Spooner Sectional. Back then it was a one-class state tournament.
This week’s memory picture has significance here at The Times office. On Sunday, June 29, 1958, a get-together of all the publishers of The Times since it had been originated by A. G. Huhn in 1913 took place in Turtle Lake.
The old Turtle Lake Bugle was started in 1900 by I.A. Averill, who sold out to Wm. C. Lyons in September 1902, who later sold to A.H. Nuesse in March 1903. Mr. Nuesse continued to publish The Bugle until October 1913 when he sold to Al G. Huhn, a former printer who was operating a restaurant in Turtle Lake at the time.
Huhn published one issue of The Bugle and renamed the paper “The Turtle Lake Times”. The newspaper continued under Huhn until February, 1929, when it was sold to Mr. and Mrs. Lester Arnold.
The Arnolds operated The Turtle Lake Times until July 1929 when they sold to Roy Holman. Mr. Holman kept the newspaper going through the depression years of the early thirties, selling out to Alton Grinsrud in September 1936.
Grimsrud also began publishing the Almena Broadcaster, finally combining this paper with the Turtle Lake Times, calling it The Times. In September of 1945 he sold to a partnership of Harold A. Lange and R. A. Pedersen.
This partnership continued until May, 1948, when the present owner, H.A. Lange, bought out Mr. Pedersen’s interest and has continued as publisher up to the present time.
This get-together was prompted by the Golden Wedding celebration of Mr. and Mrs. A.G. Huhn and was the first time that all of the publishers, with the exception of Mr. Pedersen, met together at the same time.
Pictured, left to right, is Al Huhn, Lester Arnold, Roy Holman, Alton Grimsrud and Harold Lange.
The GTLAA is still looking for old photos. Some have been received but more are needed, especially old Turtle Lake town and farming photos. If anyone has old photos or negatives and wants them included in the upcoming history book, now is the time to get them in. They can be scanned so you can have the originals back. Please contact Dave Skrupky (dskrupky@centurytel.net) or Dave Slack (halcopress@yahoo.com) to scan your history photo.
___________________