It is estimated it will take cost aproximately $470,000 to bring the school track up to a complex that will be able to hold not only conference meets, but regional and sectional meets as well. It will entail turning the six lane, blacktopped paved, current track into an up-to-date rubberized eight-lane track complete with long jump, triple jump, high jump pits, together with pole vaulting, shot put and discus areas.
With fundraising efforts proceeding presently, the school board discussed selling the south school forest once again to help fund the endeavor at their most recent meeting.
In November, 2016, the school district presented voters with the question of approving $100,000 a year for four years to renovate the track 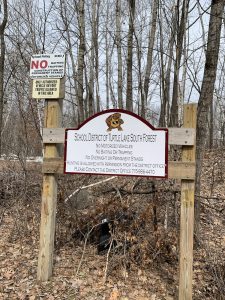 to the proposed specifications. By a vote of 1003 to 603, district residents voted the proposal down.
The south forest was deeded to the school for $1.00. The forest was used by the school and students in the past prior to obtaining the north forest. However, the most popular use has been the selling of timber from the forest.
A market analysis was provided regarding the property. The forest is nearly 170 acres on the west end of Big Moon Lake. Much of the property is landlocked due to a creek that runs through it. Additionally, two old landfills are located on the property with requirements that need to be followed by the perspective land owner should any construction take place.
Two different scenarios were examined which described the value per acre should present property owners who board the forest wish to purchase it and another scenario in which none of the present landowners would purchase it.
Looking at the sale under the best scenario the property value was estimated between $288,300 and $328,270. Under the worse scenario the values dropped to $206,700 – $271,670.
At the March school board meeting Alfred Thill appeared before the board and said he felt residents were not voting against the track, they just didn’t want their taxes raised. He felt the district needs to put money into the project. He said he recalled the students used to be loaded into the bus and went to the south forest to plant trees. When asked when the last time students had traveled to the south forest was, Superintendent Kent Kindschy replied about eight years ago. Kindschy also noted it had been a couple of years since any students had been to the north forest.
Thill added back in 1956 the donors gave the school the forest for the kids to use, not to sit idle. He added the school is not able to get the volunteer machinery it would take to redo the track. “We need the money.”
District resident Becky Wright asked how many acres in size were the south and north forests.
Wright was told the south forest was 169.8 acres in size and the north was 180. She then asked if the school board was looking to sell only the south or the north forest.
School board President Shad Torgerson explained his personal preference is to not sell the north forest at this moment. He added some of the south forest is unusable to the school because it sits across the creek that disects the property.
When asked whether the school would sell the property in 40-acres parcels or 80-acres parcels it was suggested to examine an online sale.
Former FFA teacher, Don Dippery, said, “once it’s gone, it’s gone. I like having a savings account. You never know what’s coming up. I know we need a track but what happens in 20 years when we have to replace it.”
Wright commented that if both the south and north forests were sold the school district would be realizing an additional tax base they presently don’t have with the properties.
Torgerson told those in attendance the board’s intent is to get the most they can get for it.
Present Tech Ed teacher, Dale Koehler, said Forestry is in the curriculum and in the next couple of years the curriculum could change where the district would utilize it more. He suggested the school not sell them both.
Torgerson said he would like to keep the north forest due to it being closer and a nicer forest once it gets cleaned up from the storm damage.
Jeff Wright asked the board what the upkeep on the track would be and was told every six to eight years the track would have to be recoated. That would cost $60,000 – $70,000.
Wright asked if that money would be in the budget.
Torgerson said Turtle Lake co-ops with Clayton and hopefully Clayton would help offset the cost by putting in more than they do presently.
Trustee Kevin Jansen said it wasn’t fair to the Turtle Lake community to have to foot the entire bill and also a new complex such as being proposed would be beneficial to the community when the school hosts track meets.
Torgerson explained no vote would be taking place as this was a discussion item only.
All were in favor with moving forward with discussions with the realtor and the Clayton School District.
Trustee Tadd Peterson closed the discussion by saying anyone that wants to speak up regarding this issue can call a board member. “We want to hear from them.”
_________________