Two people were injured in a Polk County UTV accident south of Osceola Monday, April 2.
According to the Polk County Sheriff’s Department officers responded at 5:14 p.m. to the crash in the area of 250th Street, north of 30th Avenue.
Michael Demulling, age 63, of New Richmond, was southbound on 250th Street when he lost control of the 2015 Polaris Ranger and entered the ditch. Demulling suffe 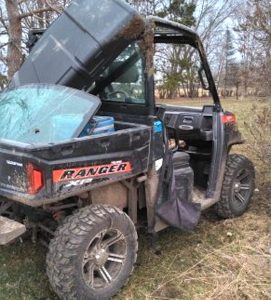 red serious non-life threatening injuries and was transferred to Regions Hospital.
A passenger in the UTV suffered minor injuries.
No seatbelts were used and neither riders was wearing a helmet. Demulling was cited for operating the UTV while intoxicated and also for unreasonable and imprudent speed.
Assisting the Polk County Sheriff’s Department was the Osceola Ambulance and First Responders.