Shortly before noon on Saturday, April 25 the Turtle Lake Fire Department responded to a call of small campfire that had gotten out of control and turned into a grass fire at and was getting close to a stand of pine trees and buildings at a 1-1/2 Street, Clayton address.
“When we arrived on scene we had the initial grass fire to deal with plus an old granary that was fully engulfed,” explained Fire Chief Brock Molls.
The fire was contained before spreading to the house and barn. The structure was a complete loss. No people or pets were injured in or during the blaze.
“The house that was just 50 feet from the granary was saved,” Molls added. “If the wind would have been blowing just a few degrees in a different direction, it could have easily burned th 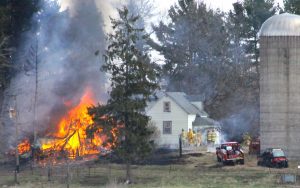 e house down. Perfect example why the burning ban is in effect.”
The dry spring conditions have prompted burning bans throughout the State. Coupled with the windy conditions, fires for the purpose of burning leaves, grass and brush can get out of control quickly, creating a possible fire hazard. All burning within the Turtle Lake Fire District, including the Village of Turtle Lake, is prohibited until further notice from the Turtle Lake Fire Department.
The Clayton and Prairie Farm Fire Departments were called to assist with the fire.