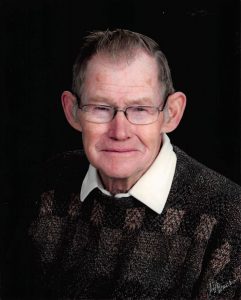 Charles (Chuck) Peterson of Turtle Lake, WI passed away Tuesday, April, 28th at home surrounded by family at the age of 88. Chuck was born Sept. 28th 1931 at home in Turtle Lake to Carl Peterson and Ellen (Lindberg) Peterson. He was married in Turtle Lake, WI on April 25th, 1970 to Mary Peetz.
Chuck and Mary lived in Turtle Lake on the family farm that his grandpa homesteaded in 1884. After he graduated from Cumberland High School he remained at home and helped his mom on the family farm.
Chuck loved farming and working with his hands to fix and build many things. Over the years he farmed, hauled milk, worked construction and did carpentry work until the young age of 77 when he officially retired. Chuck enjoyed watching and listening to all sports, particularly Badger Football, the Packers, and the Brewers. He even made it to Lambeau Field twice to watch the Packers play. He was an avid reader and loved history. Chuck cherished sharing stories and jokes with everyone around him, especially his grandchildren. He also enjoyed putting puzzles together and playing games with his grand-kids.
Chuck is survived by his wife Mary of fifty years; daughter and son-in-law, JoDee Peterson-Lochner and Scott Lochner, daughter and son-in-law, Tammy (Peterson) Todd and Matt Todd; grandchildren, Tianna Lochner, Wyatt Todd, Koral Todd, brother and sister-in-law, Carl Peterson Jr. and Karen (Warwick) Peterson, numerous nieces and nephews, and great nieces and great nephews.
Preceded in death by two sons John Peterson 1970, and Bruce Peterson 1971, his parents Carl and Ellen Peterson, his sister Florence Peterson and many other relatives.
A visitation was held at Skinner Funeral Home in Turtle Lake on Monday, May 4, 2020. Burial will be at St. Ann Cemetery 11:00 a.m. Tuesday, May 5th 2020.
A celebration of life will be held at a later date.