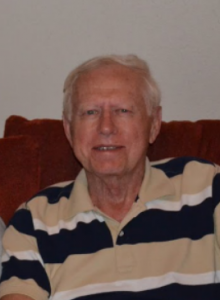 Carl Henry Molls, 85, passed away Saturday May 23, 2020 after a short battle with COVID-19. He was born March 3, 1935 in Eau Claire to longtime residents, Carl H. and Anna (Koehler) Molls. Carl was the second of five Molls children, which included Betty, Geradline, Roman, and Don. Carl attended Turtle Lake School, and at the age of 17, he headed to Minneapolis to work for Honeywell.
He met Jane Annette Cosert in Minneapolis, and they married on September 1, 1956 in Mason City, IA. They made a home in Minneapolis and spent weekends at a small cabin near Carl’s childhood home on Upper Turtle Lake. Together they had two children, son, Kevin, and daughter, Susan. In 1972, Carl and Jane made the cabin their permanent home and enjoyed many years on the water. In his finals years, Carl relocated to Cedarburg, WI.
Carl was the first employee at New Richmond Industries in New Richmond, WI, where he retired as a purchasing manager in 1989. Although retired, Carl continued to stay busy and social, and took on many part-time jobs around Turtle Lake and joined the Lions Club.
Carl enjoyed playing cribbage with friends and family. He was an active member of the local snowmobile club and was very close to his siblings his whole life. He loved bowling and bowled in leagues and tournaments in Clayton and Turtle Lake. Carl continued playing into his 80s in Cedarburg. He was a dedicated Minnesota Twins and Vikings fan; however, his favorite games were those played by his grandchildren and great-grandchildren, where he cheered them on from the stands and always gave a post-game hug.
He is survived by a son, Kevin (Jane E.) Molls on Turtle Lake; daughter, Susan Molls of Cedarburg; seven grandchildren: Amy (Mark) Roemhild, Emma (Kelly) Molls, Reed (Mariah) Molls, Ivy Molls, Max Molls, Benjamin (Heather) Ludy, and Nicholas (Brianna) Ludy; five great-grandchildren: Sidney Roemhild, Ross Roemhild, Marney Roemhild, Miles Ludy, and Cora Ludy; nieces, nephews, and many other family and friends. Carl was preceded in death by his wife, Jane; parents, Carl H. and Anna Molls; and his brother, Don Molls.
A Celebration of Life will be held at a later date.
Skinner Funeral Home of Turtle Lake is serving the family.