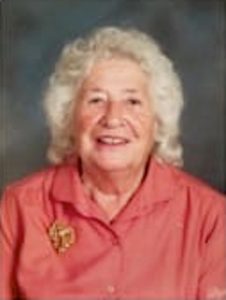 JoAnne Lorraine Krier, age 82, of Turtle Lake, Wisconsin passed away peacefully on May 19, 2020 surrounded by her loving family. JoAnne was born on July 30, 1937 in Denver, Colorado to John and Madeline (Rapue) Tapparo. She grew up in Kiowa, Colorado and graduated from Kiowa High School. She enjoyed knitting and was known for her great spelling skills in her younger years.
In 1954, she married Don Schriner. She enjoyed traveling while Done was in the Navy, and explored while living in Colorado, California and Washington throughout that time. They later resided on a farm in Elizabeth, Colorado. They had three daughters together, LaDonna, Judi and RoxAnne. Later, Don and JoAnne divorced.
In 1972, JoAnne married Steve Krier and they moved to Prairie Farm, Wisconsin where she enjoyed working alongside Steve on the dairy farm. They were blessed with two children together, a son Jesse and a daughter Renee.
JoAnne worked a the Montgomery Ward in Denver, Colorado, was a substitute teacher, and worked in the Child Support Office for Polk County, Wisconsin. She was a strong advocate and communicated often with the state legislated and officials to present and pass bills in support of children and their families. She always opened her home and heart to families in need.
JoAnne’s five children, twelve grandchildren, and eighteen great-grandchildren were her pride and joy. She loved teaching her grandkids how to play cards, telling them stories from the past, and participating in rock hunting with them. She enjoyed playing cards, gambling at the St. Croix Casino in Turtle Lake, playing the piano, drawing/writing/ painting, bowling and spending time with her family. She is well known for her kind-hearted spirit, her love for God, and her sarcastic witty personality. She was the best at teaching her kids and grandchildren all about God and the bible.
In 2016, JoAnne resided to Glenhaven, Inc. in Glenwood City, Wisconsin. She enjoyed having the kids at the Child Care Center come and visit with her, as well as her family and friends. Later in 2020, JoAnne moved into her daughter LaDonna’s home to be surrounded with her loving family and she thoroughly enjoyed the frequent visits she received from everyone.
JoAnne is survived by her five children, LaDonna (Jeff) Christianson, Siren, WI; Judi Beestman (Bill Dyer), Clayton, WI, RoxAnne (Jack) Forrest, Stevens Point, WI; Jesse (Heidi) Krier, Clayton, WI and Renee Gehrman (Brent Voeltz), Forest, WI. Her twelve grandchildren, Melissa Mogen (Nick Haessly), Jeramie Christianson, Chris Beestman (Amanda Clausen), Isaac Beestman (Katey VanderWyst), Joseph Beestman, Brittany (Justin) Vondra, Hilary Forrest, Jackie (Nick) Bjugstad, Kim (Luke) Weiss, Makenzi Gehrman, Tucker Krier and Tyson Krier. Her eighteen great-grandchildren, Connor Haessly, Emma Haessly, Jamison Mogen, Evangeline Haessly, Kanaan Christianson, Brach Christianson, Justus Christianson, Fletcher Christianson, Brandon Tyler, Charlie Minor, Hunter Beestman, Gunner Beestman, Aria Vondra, John Vondra, James Vondra, Connor Klabon, Collin Klabon and Layla Bjugstad. Her sister, Jean (Steve) Engle and brothers Richard Tapparo, Bob (Judy) Tapparo and her sister-in-law, MaryAnn Anderson, along with many nieces, nephews and cousins
She was preceded in death by her father (John Tapparo), mother (Madeline Tapparo), brother Johnny Tapparo, and great grandchild Glanna Haessly.
JoAnne will be deeply missed by her family and friends.
A burial service will be held at St. Charles Cemetery East on County Road D off County Road K, Clayton, Wisconsin on June 7, 2020 at 2:00 p.m. Following the service, a celebration of life will be held at Judi and Bill’s home (938 15th St., Clayton, WI).