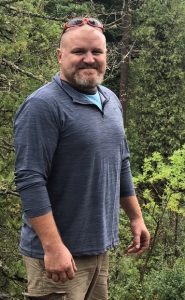 Todd Patrick Peltier, age 47, of Prairie Farm, Wisconsin, passed away on Saturday, May 30, 2020 in Rochester, Minnesota after a brief battle with cancer.
Todd was born in Hudson, Wisconsin on September 24, 1972, along with his very best friend and brother, Scott to Donald and Patricia (Harmon) Peltier.  At six months old, he and his family settled on a farm near Almena, Wisconsin.  He graduated high school in 1991 from Barron, Wisconsin where he will always be remembered for his wrestling ability, athletic dedication and kindness to all.
He went on to work and farm in several towns around the area. In 1999, his baby girl was born and in 2001, his precious son.  Todd’s world revolved around his kids.  Every decision made from then on had them at heart. In 2003, Todd began working at Noble Tire Service in Barron, where the Stephens family became family. In December 2014, he realized a longtime friend was truly the love of his life. He and Maranda, surrounded by their beautiful children, were married on August 24, 2015 in Phelps, Wisconsin.  They blended their families and started their amazing journey of love.
Todd truly enjoyed life and if you were fortunate to know him, you were better for it. He enjoyed spending time with family and friends, sharing funny stories along the way. He enjoyed attending his children’s activities, coaching youth wrestling and was a lifelong Cincinnati Bengals fan. He was always available to lend a hand to family and friends, spending countless hours laughing and loving.
Surviving are his wife Maranda; children, Lacie and Chase Peltier, Isabella, Olivia, and Amelia Lombardo; father, Donald Peltier; brother, Scott (Val) Peltier; sisters, Michelle (Dave) Newman, Janelle (Jeff) Nelson, Kris (Jeff) Lindstedt and Carrie (Aaron) Amundson; mother-in-law, Mary (Jeff) Allram; father-in-law, Brad Shipley; sister-in-law, Maureen (Josh) Hoffman; as well as aunts, uncles, nieces, nephews, cousins and countless friends.
Todd was preceded in death by his mom, Pat Peltier; paternal and maternal grandparents.
A short service will be held at 3:00 p.m. on Sunday, June 7, 2020, followed by a celebration of life until 8:00 p.m. at The Church Barn located at 1615 13 ½ Street in Barron.
Arrangements are being handled by Rausch and Steel Funeral Home in Barron.   Online condolences can be made at www.rauschandsteeelfuneralhome.com.