The Turtle Lake Fire Department responded to a structure fire Monday afternoon at 117 Pine Street South. A call was received at 4:05 p.m. regarding a shed on fire behind the Pine Street South residence. Upon arrival firefighters found a shed fully engulfed in flames. Investigation showed the homeowner had been burning dead grass around the corner of the house when the wind spread the flames to some dried leaves by the shed, catching the shed on fire. While the shed was a complete loss the fire also damaged the house, melting the siding on the west side of the residence and breaking a window due to the heat. According to Fire Chief Brock Molls the home would have caught fire within five minutes of the fire department arriving on scene. It took firefighters approximately 30 minutes to extinguish the blaze. 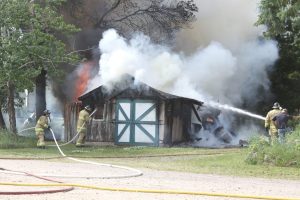