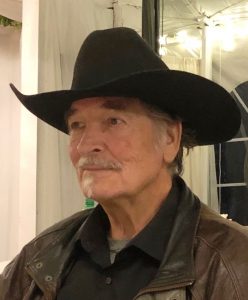 Edward (“Big Ed”) Douglas Thompson Sr. grew up in Minneapolis and graduated from Spring Lake Park High School in 1963. He served in the 101st Airborne Division of the US Army from 1964-1967, started working as a car mechanic and then went on to take further study at Dunwoody Institute in welding, putting his welding skills to work at Carter Day Company for almost twenty years. In his later years, he went back to school for Heating & Air-Conditioning and worked as a Building Maintenance Manager overseeing several residential complexes.
He married Barbara Jean Halverson in 1966 and they raised three children: Kellie, Ed Jr., and Mary. While he always liked to work on projects and liked to make things with his hands, his favorite hobby was singing, and he had a PA sound system to entertain friends and family at gatherings. Ed sounded just like Elvis Presley, his favorite singer.  He loved vintage cars and would go to the Back-to-the-’50s events each summer at the Minnesota State Fairgrounds with his brother-in-law, Bob Halverson. They would talk for hours, like excited kids, about the cars at the event.  His way of showing love and affection was often by making or fixing things for loved ones, and he took great care in woodworking and finishing items to give as gifts.  After his wife Barbara passed, his relationship with his two brothers, David and Dale, drew closer and they would meet together for lunch. While he wasn’t an avid church-goer, he always maintained a personal relationship with God and would say that God is found by looking internally, rather than by looking outside of the soul to the physical things in the world.
Ed is preceded in death by his wife, Barbara, daughter Kellie Bauch, and brother Donald Thompson. He is survived son Edward Jr., daughter Mary, and siblings David and Dale Thompson, Kathy Walton, Maryann Case, Jan Miller, and Joyce Wehrman. A service with Military Honors and burial for Edward and Barbara will take place at the Fort Snelling National Cemetery in Minneapolis at 11:45 am on Thursday, July 2, 2020.  Those wishing to attend should meet 15 minutes prior to the service at assembly area 5.
To sign an online guest book and view a video tribute visit www.williamsonwhite.com.  Arrangements were made with the Williamson-White Funeral Home and Cremation Services of Amery.