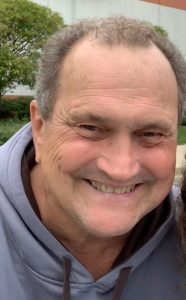 Ricky LaVern Wuorenma, 67, of Almena passed away on The Lord’s Day, Sunday, June 28, 2020 in the log home he built. After a long and courageous battle with cancer, he passed away peacefully surrounded by family. It was the perfect day.
Rick was born May 14, 1953 in Rice Lake, WI to LaVern (Eric) and Shirley (Koepp) Wuorenma, was raised in Almena and graduated from Barron High School in 1971. Rick graduated from Milwaukee School of Engineering with two Associate’s Degrees and a Bachelor of Science in electrical engineering. He went on to achieve a Master of Science in information systems from Roosevelt University School of Business in Chicago.
Rick worked for Cutler Hammer for two years as an electrical engineer before serving with the US Navy as a Lieutenant Commander Aviation Officer from 1977 – 1987. He flew commercial aircraft for Pan American Airlines for five years before he moved back to Almena and owned and operated Soil Rich 2000. He met Debra (Nelson) Del Monte and they were married in St. Matthew Lutheran Church, Almena on August 19, 1995. Rick worked many years in the area, eventually retiring from Seneca Foods in 2019. Most recently, Rick was honored to be named as a published author. His book, My Father’s Guide to Prostate Cancer will be released later this year. In his spare time, Rick enjoyed hunting, reading, snowmobiling, camping, and sharing time with family and friends. His faith was a guiding force in his life.
He is survived by his wife, Debra of Almena; four daughters: Stephanie (John) Combs of Streamwood, IL, Kristen (Eddie) Main of Des Plaines, IL, Erin (Greg) Steilen of Barrington, IL, and Natalia (Robb Held) Del Monte of Rice Lake; six grandchildren: Derrick, Hunter, Samantha, Alyssa, Amelia and James; one brother, Alan Wuorenma of Almena; nieces, nephews, cousins and other relatives. Rick was preceded in death by his parents and his brother, Larry Wuorenma.
A memorial service was held at 11:00 a.m. Wednesday, July 8, 2020 at St. Matthew Lutheran Church with Pastor Preston Paul officiating. Burial was in St. Matthew Cemetery. Pallbearers were Mike Miller, Tom Kaus, Marty Haglund, Randy Matthys, and Alan Wuorenma.
Skinner Funeral Home of Cumberland is serving the family.