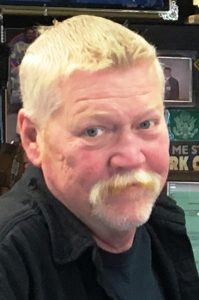 On August 25, 1961 in Milwaukee, WI Stanley and Nancy Johnson welcomed into this world a red-headed boy whom they named Dean Thomas Johnson.  He was also known to his family by his nickname: Archie.  (This was bestowed upon him by his older brother, because of his likeness to the red-haired and freckled comic book character.).
He was an active, energetic boy, with a temperament to match his flaming hair.  Dean was an avid sports participant all through school as a wrestler, football and basketball player, and shot putter.  He made many friends during those years, friends that stayed with him the rest of his life.  After his school years, he supported professional sports, enjoying the games with his friends.
Dean loved being with his family and his many friends.  But he also cherished his “alone” time:  going for a drive (in his truck or on his bike), walking in the Barrens, and exploring remote places.  He loved driving semi-truck and seeing the countryside, especially out west.  He enjoyed hunting, fishing, and going for a ride on his motorcycle. He liked trying new recipes, and grilling in the outdoors.  He shared many interests with his father: woodworking, building birdhouses, John Wayne movies, Lonesome Dove and The Sacketts books, as well as the value of hard work and the importance of family.  He was an avid hunter and fisherman, enjoying time spent in the woods either alone or with his father.
Dean worked many places in his lifetime, among them:  Plastech in Amery, Wisconsin; Precision Casting in Milwaukee, driving over the road, and as a trucking dispatcher.  He also worked in several retail businesses. He did whatever he could to stay active and productive, and appreciate the time given to him.  Dean had the biggest, kindest heart and when you got a hug from him, you could feel exactly how he felt for you.  He especially loved being among his friends. Whether it was watching a football game or tipping a few back at Charlie’s, he didn’t really care where he was.  He made it special whenever he was around. His later years were riddled with health problems; first his heart, then the cancer.  Through it all, he was lovingly supported by his family and friends. His courage and strength to fight as long as he did was inspirational.
Dean passed peacefully at home at the young age of 58, surrounded by his family on July 23, 2020, after a 12-year battle with cancer.
He is preceded in death by his parents, Stan and Nancy Johnson, and by his nephew, Jason Roberts.
He leaves behind Mia (his cat, who we all know was his and his only!), three kids: Laura Johnson, Phillip Williams, and Mike Johnson, grandson Jamie and many nieces and nephews. He will also be greatly missed by his brother Doug (Patti) Johnson and three sisters:  Diane Burritt, Denise Johnson, and Donnamae (Waynne) Bjurstrom.
A Celebration of Life service for Dean will be held at 1:00 p.m. on Saturday, August 8, 2020 at DD Kennedy Park, 1459 Kennedy Mill Ave., Amery.
To sign an online guest book and view a video tribute visit www.williamsonwhite.com.  Arrangements were made with the Williamson-White Funeral Home and Cremation Services of Amery.