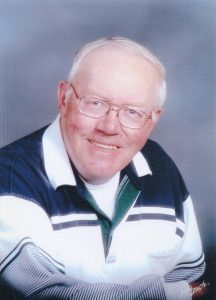 Robert (Bob) Dale Peterson, age 83 of Hudson, died suddenly August 4th, 2020 at the Christian Community Home Pine Ridge Gardens in Hudson, WI. Bob was born September 29th, 1936 in Clear Lake Township, Polk County, Wisconsin to Herbert and Elsie Peterson.  He attended the Clear Lake Schools, graduating in 1955.
Like so many people in 1955, Bob headed to the Twin Cities to find work and worked at several jobs before signing up to sail the ore boats on the Great Lakes in 1957.  He worked as a coal passer on the S.S. Fayette Brown, the S.S. D.O. Mills and the S.S. Adriatic. In 1958, he also worked with his brother, Charlie, and father, Herb, at their Mobil Oil Service station in St. Paul, MN. In 1960, he began working at Resurrection Cemetery in Mendota Heights, MN as a laborer and retired in 1996 as its field manager. During this tenure, his entrepreneurial spirit was seen in many arenas. He built and sold trailers, fixed lawn mowers and snow blowers, and maintained the golf carts for the Hudson Golf Course and Country Club. In retirement, Bob continued his business ventures as a landlord, part time farmer and buyer and seller of things for many years. Throughout his life, he enjoyed years of snowmobiling and fishing, tractor rides with his grandkids, cold beers and brandy bumps with family and friends, and working in his garage until his wife’s death in 2018 when he became a resident of Pine Ridge Gardens Memory Care, suffering from the onset of dementia.
He was preceded in death by his wife of almost sixty years, Priscilla; his parents, Herb and Elsie Peterson; and his siblings, James Peterson, JoAnne (Doug) Hallberg and Charles Peterson. He is survived by: his sisters Marjorie Lawin and Bonnie (Tom) Hallberg; four children, Todd (Velvet), Tammie (Rodney Mangelsen), Karri (Craig Lindholm), and Jamie (Tammilynn); grandchildren, Jacob Peterson, Morgan Mangelsen, Matthew (Heidi) Mangelsen, Samantha (Ashton) Duke, Nicholas (Britni) Peterson, Brookelynn (Corbin) Dirks, Tyler Peterson, Tristan Peterson; his great grandson Carter Peterson; and many nieces and nephews.
Graveside Service for Bob were on Saturday, August 8, 2020 at the Swedish Congregational Cemetery in Clear Lake, Wisconsin. Memorials preferred to the family’s discretion.
Services are entrusted to the O’Connell Family Funeral Home of Hudson, WI. www.oconnellfuneralhomes.com