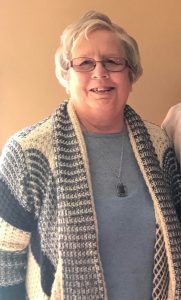 Barbara Jo Weiss, age 75, of Prairie Farm, Wisconsin (formerly of Clayton, Wisconsin) passed away on September 30, 2020 after a brief battle with pancreatic cancer.
Barbara Jo, along with her identical twin sister, Nancy Jo, were born on July 18, 1945 in Milwaukee, and taken home by the most loving parents, Joseph and Margaret Conley.  She grew up in St. Paul, Minnesota and graduated from St. Bernard’s High School.  She enjoyed bowling and celebrating her Irish heritage on St. Patrick’s Day with the Conley Clan.
In 1966, she married William Weiss and they made their home in St. Paul for a brief time before venturing across the border to Wisconsin, where they remained for the rest of her life.  Bill and Barb have three children: William, Bruce and Bonnie.  Barb worked at Midwest Ducts (a.k.a. Lukjan Midwest) for 18 years before retiring in 2018.  Throughout her life, she also worked at Prairie Farm Schools, Bremer (formerly Northwest) Bank in Amery, Tri-County Implement in Turtle Lake, and Clayton Schools.
Barb’s greatest joy were her grandchildren.  She rarely missed a sporting event, program, play, concert, or anything else they were participating in.  Barb’s home was always open and she graciously welcomed her children, grandchildren and their many friends at any time with a smiling face and goodies of some sort.
Barb is survived by her husband of fifty-four years, Bill Weiss of Prairie Farm; and three children, Bill (Sopheak) Weiss of Savage, Minnesota, Bruce (Sarah) Weiss of Hurley and Bonnie (Don) Roemhild of Prairie Farm; nine grandchildren, Luke (Kim) Weiss, Ryan Weiss, Dakota Haanen, Scotlyn Roemhild, Logan Haanen, Spencer Roemhild, Charlie Haanen, Cameron Weiss and Kensi Weiss; twin sister and best friend, Nancy Mench, and sister-in-law, Cathie Conley, along with many nieces, nephews and cousins.
Barb was preceded in death by her parents, Joseph and Margaret Conley; siblings, Joseph Conley, Jr., Mary Lou Haider, Kathryn “Kay” Niva, Patrick Conley; sister-in law, Maureen “Moe” Conley, and brother-in-law, Joseph Mench.
Her loving, kind-hearted soul will be deeply missed by many.
A graveside service was held at Mount Hope Cemeery in Turtle Lake on Tuesday, October 6, 2020.
Arrangements were handled by Rausch and Steel Funeral Home in Barron.  Online condolences can be made at www.rauschandsteelfuneralhome.com.