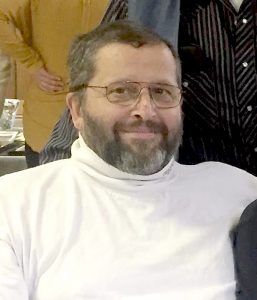 Randall “Randy” Hank Koenig, 64, of rural Clear Lake passed away peacefully on October 17, 2020 at United Hospital in St. Paul, MN with family by his side.  Randy was born on August 2, 1956 to Walter and Palma (Bowers) Koenig in Cumberland, WI.  Randy married Delmy Benitez and together had three children, Mercedes, Peter and Paula. In 1994 he and Wendy were married in Clear Lake where they made their home until the present time.
Randy was known for his practical jokes, for his willingness to help anyone who was in need, and his generosity.  He was a life-long work-a-holic, but as a result passed along an ethic of hard work and self-reliance to his children.  He collected tools and projects at about the same rate, and his children are sure he outfitted many tool boxes with the tools he left behind at various project sites.  Randy grew up on the farm, and farming remained in his blood.  He would take off work to help plow and harvest and thought there was very little in life more enjoyable than simply driving a tractor across a field.  Later in life, as grandchildren came along, he became beloved “Papa” and delighted in time spent with his eight grandchildren.
Randy is survived by his parents Walter and Palma Koenig of Turtle Lake; wife Wendy Koenig of Clear Lake; children: Jackie (Scott) Visger and children Avery, Halle and Easton of Superior, WI, Rob (Mindy) Warland and children David, Caleb, and Evelyn of Minneapolis, MN, Mercedes Koenig of Wheeler, WI., Peter (Deana Zemke) Koenig of Clear Lake, Paula (Joe Bearheart) Koenig and children Ajahnei and Lucian of Clear Lake; sisters: Pam (Randy) O’Flanagan of Glenwood of City, Nancy (Blaine) Peterson of Turtle Lake and Leslie (Doug) Anderson of Turtle Lake; many nieces, nephews and friends.
Due to the on-going health crisis, a private funeral service will be held at Zion Lutheran Church in rural Almena with burial following in the church cemetery.  Pallbearers are Ryan Ludemann, Keith Kahl, Kevin Kahl, Doug Anderson, Richard Heibel and Chris Tourville.
Friends may call from 4:00 – 8:00 p.m. on Wednesday, October 21, 2020 at the Skinner Funeral Home in Turtle Lake. The family asks that masks be worn and that care is taken in social distancing for the health of all, particularly the elderly and those who are most at risk.
Skinner Funeral Home of Turtle Lake is serving the family.