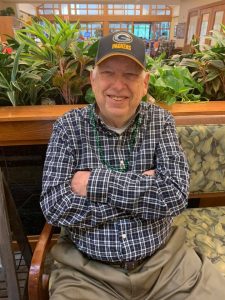 Ronald LaBlanc, formally of Prairie Farm, WI, died October 11, 2020 at the age of 82 at the Auberge Memory Care Facility in Menomonee Falls, WI. Ron was the youngest son of Emily (Laconic) and William LaBlanc of Turtle Lake, WI. Ron graduated from Turtle Lake High School in 1958. He was drafted into the US Army at age 23 and was stationed in the Philippines. He served as a rifle specialist and earned accommodations as a rifle expert and for good conduct. He was honorably discharged from service in 1963.
Ron married his wife Marlys (O’Flanagan) on June 9, 1973, and the two moved to Prairie Farm in 1980 where they lived until 2019. Ron worked at AMPI in Turtle Lake until he retired in 2000 after 36 years. Ron enjoyed working outdoors and spent many happy hours maintaining trails in the 40+ acres of forest on the farm. Ron moved to Menomonee Falls following the death of his wife to be closer to his daughters and to undergo care for his Alzheimer’s disease. He made many friends and was able to experience many old and new activities during his last year.
Ron is preceded in death by his wife, Marlys; his brothers Bryon, Johnny, Laurence, Robert, Ervin, and Francis; his sister, Alice; and his parents. He is survived by his two daughters: Colleen LaBlanc of Pewaukee, WI, and Kelly LaBlanc of Waukesha, WI. He is also survived by many nieces, nephews, great- nieces, great-nephews, and friends.
A memorial service will be held later when conditions are more conducive to safe social gatherings. Memorials in Ron’s name can be donated to the National Alzheimer’s Association (http://act.alz.org/goto/RonaldLaBlanc), the Dunn County Humane Society (https://dunncountyhumanesociety.org/), or the United Lutheran Church of Prairie Farm, WI where Ron and Marlys were members for many years.