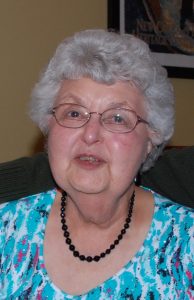 Carol Jean Tornio, 88, of Turtle Lake, passed away peacefully on October 22 at Glenview Special Care in Shell Lake.  She was born at Cumberland Hospital, the oldest child of James “Ed” and Lucille Gaffney (Oldham).  She grew up and spent her entire life living in Turtle Lake.  Her father Ed was a lifelong Ford mechanic and her mother was a teacher.  She was a bright student, and was the Valedictorian of her class in both elementary and high school.
While in high school, she and her friends would go to the park downtown for outdoor movies on Saturday nights. Her parents warned her to be sure to avoid the roughneck, country Finn boys who would come to town to fight.
After graduation, she began working for the Turtle Lake Creamery in the office doing clerical duties.  A few years later, she was introduced by a close friend, to a young Army man from the Korean War who was home on furlough.  After his discharge and safe return to California he bought a car and headed home to Carol Jean.  Without adequate funds to make the journey, he stopped in Reno, Nevada and put the last of his money down on the blackjack table.  Winning enough to get himself home.  Carol would soon be married at St. Phillips Episcopal church to Kenneth Tornio, one of the Finn boys she was warned about.  They were married for 66 years, and lived in the same white house for 65 of them.  After several years she began working for the Turtle Lake School District, as assistant to the District Administrator where she would remain until retirement.
Carol and Kenny liked going to supper clubs like Beno’s, dancing in Richardson, fishing, and picking agates on Summer vacations to the North Shore of Lake Superior.  She would later learn to golf and played regularly.  They loved spirited games of 500 with friends and family.  She was a very good cook, and was a wonderful pie maker.  She was adamant that lard was the only option for a good, flaky crust.  And complained later in life, that you just couldn’t get good lard anymore.
In 1967 Carol and Kenny adopted a son, Christopher, and she was a loving mother to their only child.
After retirement, Carol and Kenny would take in several Minnesota Twins games every Summer, golfed and enjoyed watching college sports, and she served on the Turtle Lake election board.  She, along with Kenny, were loving and available grandparents to all.  She would greet the end of a morning bath with a towel warmed in the dryer.  The details mattered.  She was preceded in death by her husband Ken, her parents, and one young brother, James.  She is survived by her son Chris (Amy) Tornio, her Sister Kathleen (John) Steffen of River Falls, Grandchildren Mady and Charlie Tornio, Jordan, Isaiah and Julianna Zacharias, several cousins, and her best friend June Outcalt of Beaumont Texas. Condolences may be expressed at skinnerfh.com