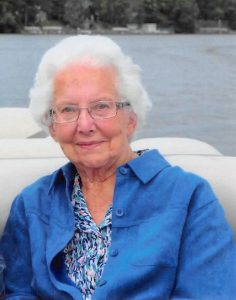 Lois Sorensen, 92, of Cumberland, was called to her heavenly home on Tuesday, October 20, 2020, at Golden Age Manor in Amery. She was born April 12, 1928, in Cumberland, to Fred and Aline (Horstman) Becker. Lois was baptized on May 6, 1928, at St. Luke’s Collingwood, and her confirmation of faith took place on May 29, 1941.
Lois graduated with honors from Cumberland High School in 1946. Immediately following graduation she began working for the Cumberland Advocate where she was employed for four years. While employed by the Advocate, Lois struck up a friendship with Mike Sorensen, who worked in the adjacent building, Sorensen Tailors and Cleaners. Mike and Lois were married in Cumberland, on April 30, 1949, and were happily married for 65 years until Mike’s death in 2014.
Lois was employed at the Cumberland Municipal Utility where she worked for 25 years, retiring in June of 1988 at 60 years of age.
When her daughters were young, Lois was very involved in church education programs and continued to be very active in the church choir and church circle. She loved spending time with her family. Grandkids and great-grandkids were frequent visitors where swimming and boating were often activities of the day as were partaking in an abundance of treats from the kitchen. Cooking, baking, gardening, and playing cards kept Lois occupied as did beautiful crocheted afghans given to family-treasures never-to-be-forgotten.
While a resident at Golden Age Manor, Lois’ eyes lit up when she had visits from her great-grandchildren or youngsters from the Amery School District who came to entertain the residents. She also enjoyed visitors who brought their pets and farm animals.
She is survived by her daughters, Nancy (John) Garibaldi of Cumberland and Joan (Philip) Kluge of Granby, CO; four grandchildren: Joe Garibaldi, Kate (Jim) Beecroft, Shana (Pete) Roehrs, and Laura (Paul) Josey; great-grandchildren: Mecina, Alora, and Lucca Garibaldi, Macy, Raegan, Asher, and Carson Beecroft, August and Gretta Roehrs, and Jane and Keith Josey; and sister, LaVerna Fischer. Lois was preceded in death by her husband, Myron Sorensen, and her parents.
A private family service will be held on Saturday, November 14, 2020, at St. Paul Lutheran Church, Cumberland with Pastor John Miels officiating. Burial will be in Lakeside Cemetery, Cumberland.
In lieu of flowers, the family requests that memorials be made to St. Paul Lutheran Church, the Lutheran Hour, or the Alzheimer’s Association.
Skinner Funeral Home of Cumberland is serving the family.