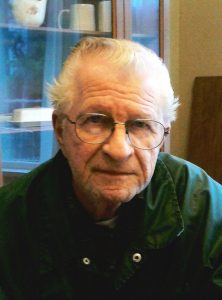 Larry James Pearson, age 73, passed away peacefully on October 28th, 2020, at Willow Ridge Healthcare Center in Amery, Wisconsin.
Larry was born on January 18th, 1947 in Amery to parents Henry and Dolly Pearson.  He started school at the Pine Hill School and then Park School, both rural schoolhouses in the Amery School district, until attending Amery High School.  After school he took over the family farm while also driving milk truck, back when they still hauled milk cans.  Being only 5’5” and 130 lbs, this was quite a feat, but he loved the farms and the farmers, so he continued for several years.  He later worked at Fay Auto in Amery, until the family retired farming altogether and he began his employment at Hartzell Manufacturing in Turtle Lake. He later worked at I.T.P. in St. Croix Falls, also taking on jobs doing milking and fieldwork for various farmers in his spare time, before starting his own white-washing business.  In his later years, he worked at the Marske Sawmill.
Larry loved country western music, Hank Williams Sr. in particular.  He wasn’t fond of the newer artists; he was old school. Anyone who knew him recognized him by his cowboy boots, big belt buckles, and cowboy hats.  He never owned a pair of sneakers in his life. He enjoyed woodworking and was a perfectionist with the beautiful pieces he made.  He was very handy at remodeling his parents’ home and his own.
Larry never married, but he did find the love of his life in Artis Nelson.  They met in 1979 and resided in Turtle Lake until her passing in 2016.  They both loved animals, especially cats.  They always had as many as they could afford to feed and provide veterinary care for.  They fenced their backyard and obtained a kennel license from the city to allow them to home the many strays and abandoned cats that found their way to their door.  Larry suffered several small strokes in 2015 which eventually led him to be placed in adult group housing, first in Cumberland and then Rice Lake.  His health continued to deteriorate and in the spring of 2018, he was moved into Willow Ridge in Amery.  There he received the excellent care that allowed him to live out his final years closer to his family.      He was preceded in death by his parents, Henry and Dolly, sister Joyce, brother Chester “Chet” and sister-in-law Mary Lou, brother Theodore “Ted” and sister-in-law Lucia “Lucy“.  He is survived by his sister, Mary Lou (Danny) Leslie of Amery; nephews Henry (Duane), Michael (Denise), Joseph, Daniel (Amber) of Virginia; and Bill (Jackie), David (Bev), and Tom (Cindy) of Minnesota, and nieces Susan Anderson and Sara (Loren) Goldstien of Minnesota. He also leaves behind many other relatives and friends.
A service is planned for next spring at the Balsam Lutheran Cemetery in rural Amery.
To sign an online guest book and view a video tribute visit www.williamsonwhite.com.  Arrangements were made with the Williamson-White Funeral Home and Cremation Services of Amery.