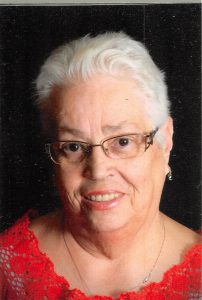 Darlene Mae Heller, 79, died Friday, November 6, 2020, at her home after many years of dealing with cancer. She was born September 4, 1941, in Frederic, to Claude and Mabelle (Fors) Ferdig. She attended school in Frederic and graduated in 1959.
In February of 1960, she married Robert Hoffman, to this union two daughters, Cynthia and Susan, were born. This marriage ended with the death of Robert. In June 1996, she married Carlyle Shutterworth, to this union two children, a son Terry, and a daughter Jodi were born. This marriage ended with the death of Carlyle. In April of 1994, she married Oswald Heller, this marriage ended with the death of Oswald in 2006.
Darlene spent her early marriage raising children and helping operate the family business, a restaurant, and a supermarket. After the children were all in school, she began teaching preschool and then added the administrator’s position to her daily tasks. She spent 15 years at Preschool Playhouse in Turtle Lake. After retiring from Preschool Playhouse, she worked at Bank Mutual in Spooner for 9-1/2 years. Darlene was very active in the community with the Royal Neighbors of America, American Legion Auxiliary. In 2010, she was awarded the outstanding Wisconsin American Legion Auxiliary member of the year. VFW Auxiliary, Salvation Army, was one of the committee members with the Northwoods Support Team of Adopt-A-Solider Platoon/Christmas Stocking Project and in 2013 she was honored by the Gregg M. Goslin AMET’s Post 190 as Community Person of the year for her service to the Veterans of Spooner and the surrounding communities. Darlene was active in the United Methodist Church and held several committee positions before her health slowed her down. As her health declined she moved to Almena to be closer to her family.
Darlene enjoyed singing, traveling, sewing (especially Christmas stockings for soldiers in Iraq and Afghanistan) and spending time with her children, grandchildren, and great-grandchildren.
She leaves behind one son, Terry Shuttleworth; three daughters: Cynthia Sage, Sue (Dale) Stoeberl, and Jodi Shuttleworth; six grandchildren; two grandsons; four great-granddaughters; and five great-grandsons. Darlene was preceded in death by her two brothers: LeRoy and Richard; parents; and her husbands.
A celebration of Darlene’s life will be held from 2:00 – 6:00 p.m. Friday, November 13, 2020, at Skinner Funeral Home in Turtle Lake. A private family burial will be held at Maple Grove Cemetery the following day.
Skinner Funeral Home of Turtle Lake is serving the family.