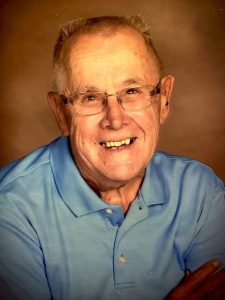 Melvin Embert Nyhus, 81, of Cumberland passed away at home on December 21, 2020. He was born October 16, 1939, to Embert and Bertha (Kern) Nyhus in Cumberland, where he would spend his entire life. Mel graduated from Cumberland High School in 1959. He married Janet Diesterhaft on June 17, 1961, and they raised their three children: Rhonda, Lynn, and Jeff.
Mel worked for thirty-five years for 3M Company and after retirement worked for Wisconsin Structural Steel for thirteen more. He loved the outdoors, especially in the summer months when he spent countless hours gardening and mowing the lawn.  He was a man of solid faith who served St. Paul Lutheran Church as an Elder and put a great deal of effort into the annual Rutabaga Festival Brat Stand.
He is survived by his wife of fifty-nine years, Janet; children: Rhonda (Ken) Rimarcik, Lynn (Greg) Rimarcik, and Jeff Nyhus; grandchildren: Carrie (Michael) Wenzel, Anna and Hope Rimarcik; great-granddaughters: Kaely, Emily, and Melonie Wenzel; two brothers: Gerhard Nyhus of Sand Creek and Ronald Nyhus of Texas; nieces, nephews, cousins, other relatives, and many friends.  He was preceded in death by his parents; brothers: Edward, Richard, Dale, and Marvin; and his great-granddaughter, Kelli Ann.
A Christian Memorial Service will be held at 11:00 a.m. on Friday, January 8, 2021, at St. Paul Lutheran Church officiated by Pastor John Miels.  A visitation will be held for one hour leading up to the service. The service will be broadcast via radio for those who don’t wish to attend in person.
Skinner Funeral Home of Cumberland is serving the family.