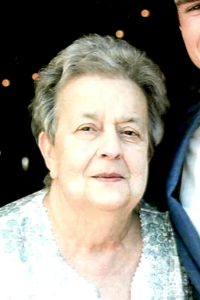 Barbara S. “Bobbie” Etlicher, 81 years old of Kenosha, WI passed away Friday, January 22, 2021.
She was born in Almena, WI on March 27, 1939, the daughter of the late Herman and Elizabeth (Becker) Blechinger. She graduated from Turtle Lake High School in 1957 and went on to work at Northwestern Bank in Minneapolis, MN for two years. She later worked in house and office cleaning for many years.
On November 21, 1959, she married Paul Etlicher in Almena, WI, and together, they moved to Kenosha where she was a member of St. Mary Catholic Church, Kenosha. Barbara loved going to the casino and was talented in the kitchen; she enjoyed sharing the fruits of her labor with family and friends. Barbara also cherished time she spent at the family cabin in Turtle Lake, WI in the summer.
Survivors include her daughters, Susan (Michael) Busse and Barbara (Gregory) Huss, both of Kenosha, WI; two sisters, Patsy (the late Lloyd) Hoffman and Janie (the late Bill) Leschisin and a brother, Joe (Jean) Blechinger; grandchildren, Nicole (Don) Buggs, Caitlin Busse, Kyle (Emily) Huss, Tyler Huss, Hannah Huss, Cameron Huss, Ryan Busse, Brittany Busse, and Chris Ochranek; and five great-grandchildren, Caiden, Collin, Kinzley, Hailee, and Kamren.
In addition to her parents and husband, Barbara was preceded in death by a granddaughter, Katrina Ochranek and daughter, Lori Etlicher.
Funeral Mass and interment will be private. In lieu of flowers, those desiring may make contributions to the Cornelia de Lange Syndrome Foundation at www.cdlsusa.org or the Alzheimer’s Association at www.alz.org, in her memory.