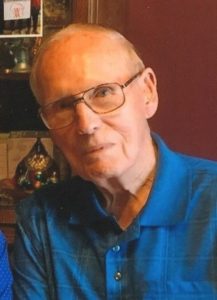 Stanley Elden (Tony) Asp, 91, of Turtle Lake, WI, passed away at Sacred Heart Hospital in Eau Claire the morning of March 25, 2021. Tony was born on October 27, 1929 in Clear Lake, WI, to Arthur and Mary (Torkelson) Asp. He was the fourth of six children. He attended Edgewood school.
When he was young, he worked in the fields of North Dakota picking potatoes and shocking grain.
He proudly served his country in the Army, and was deployed to Europe, where he served as a medic during the Korean War. He had fond memories of this time and frequently commented how beautiful Germany was.
He met Carol Nelson of Cumberland, WI and they married on August 18, 1956. After their marriage they established their home near Turtle Lake, halfway between their hometowns. Their home was one of the first on Horseshoe Lake. In the years following, they were joined by their children Rick, Joleen, and Jenny.
In 1954 he started his milk hauling business. For the first of these years, he hauled can milk to Stella Cheese. In 1961 he took a chance and bought a bulk milk truck with only one bulk patron. He grew the business to four bulk trucks, retiring at the age of 52. He hauled to Stella Cheese in Clayton and Cumberland, and to Falls Dairy in Colfax.
He enjoyed spending time with family and friends. He bonded with his kids by taking them snowmobiling and by pulling them and other neighborhood kids waterskiing. He enjoyed family vacations, trips to area casinos, watching Westerns, and playing cards. He cherished the time spent with his grandkids. He was a lifelong member of Moe Lutheran Church and was a direct descendant of those who helped establish the church.
Tony is survived by his wife of nearly sixty-five years, Carol; son Rick (Linda) Asp; daughters Joleen (Marv) Jensen and Jenny (Tom) Hullander; grandchildren Jacob (Katie) Jensen, Rachel (Josh Woods) Steglich, Logan Steglich, and Jamie Steglich; step-grandchildren Jay (Amanda) Jensen, Zach Hullander, and Maddie Hullander; step-great grandchildren Madysan Jensen and Karl Jensen; sister Sharon (Walt) Fall, and numerous nieces, nephews and friends. He was preceded in death by his parents; brothers Delbert, Harold, and Raymond; and sister Alice.
Funeral services will be held at 11:00 a.m. Saturday, April 10, 2021, at Moe Lutheran Church in Clear Lake with visitation at the church starting an hour before the service. Due to Covid-19 restrictions, attendance will be limited and masks are required during the visitation and service. Honorary pallbearers are his grandchildren Jacob, Rachel, Logan, and Jamie.