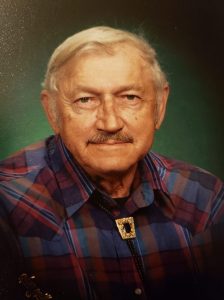 Harry Herman Jeska, 84, passed away at home March 30, 2021. He was born to William Frank Jeska and Ida Marie Kolba Jeska at home with the help of a midwife on May 5, 1936. The last of eleven children, his mother Ida often said he was long and skinny as he was “the scrapings.” Harry was baptized and confirmed at Zion Lutheran in Turtle Lake, WI.
He attended Turtle Lake School through his 8th grade graduation. He then had to leave school to help support the family. He worked for a local farmer to earn livestock for his own farm. After building up a small herd by the age of sixteen he acquired enough cows to start farming on his own. As a life-long learner, when Harry was 49 he decided that his girls should not graduate before himself, so he signed up at WITC to attain his GED.
On June 13, 1964 Harry was united in marriage to the love of his life Judy Ann Colburn. Their marriage was to be a long, beautiful romance of 56 years that was blessed with two children, Georgeina and Beth.
Living the farming life as it was for forty years, he was active as a President of the Farmers Union Milk Marketing Board for several years. When he retired from farming, he worked several years at Pixall in Clear Lake, WI. He retired once again to go to work side-by-side with his love at their business “Judy’s In The Country”. It was nothing for him to roast and slice 150 pounds of beef in a single afternoon. Harry and Judy did this together until Harry retired for a third and final time in 2016. Harry had a passion for the outdoors, always reminding us that this world and all its gifts are from our Lord and Savior—it is our gift of bits of Heaven on Earth. Harry would never pass up the opportunity of a new listening ear to share stories of hunting and fishing from days gone by or what his plan was for his next adventure. As a passionate collector of rocks, he would bless others with a special rock-hound tour through a lifetime of collecting agates and other semiprecious stones. Judy would always have to include a side trip of fishing to any vacation she would plan to keep Harry happy. Fun and adventure were had during the many trips to Canada, Alaska, Hawaii and cross-country train trips.
Harry leaves a large and loving family to cherish his memory, including his wife of fifty-six years, Judy; his favorite mother-in-law, Dorothy Colburn; daughters Georgeina Jeska O’Connell and Beth Jeska Lemieux; sons-in-law Terry Lemieux, Terry Schaffer and Blaine O’Connell; and his great nephew and honorary son, Troy Terry (Faye) and family; grandchildren Patrick O’Connell (Emma), Dylan O’Connell (Leah), Aleah Wilhem (Jacob), Alaura Lemieux and Andrew Lemieux; great grandchildren Abby, Annabelle, Lakelyn, Delaney and Pumpkin; as well as many nieces, nephews and loads of faithful friends.
A Celebration of Life was held at Celebrations at The Gables April 3rd, 2021 from 1-3pm. At 2:00 p.m. Rev. Adam Woods, members of Harry’s church family at Parkview United Methodist Church, family, neighbors and friends will gather in the chapel at Celebrations at The Gables for a Service of Death and Resurrection.