The Turtle Lake Fire Department responded to a call to Puris Proteins in downtown Turtle Lake around 9:00 p.m.Friday night, April 9 regarding two chemicals that were accidently mixed together that had the potential of creating a deadly gas. The building was evacuated while the gas was vented to the outside. The was no smoke or fire and no employees suffered any symptoms. An Eau Claire Hazmat team secured the building. Traffic was detoured around the intersection of Martin Avenue and Maple Street throughout the night. The scene was cleared Saturday morning. Also responding was the Turtle Lake Police Department and Cumberland EMS. 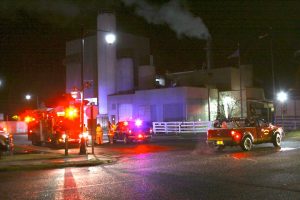