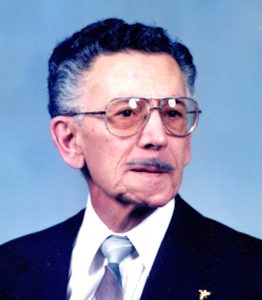 Rudolph “Rudy” F. Imbrogno was born November 29, 1927, in Kenosha, WI, son of the late Charles and Carmella (Savaglio) Imbrogno. He married Jane Anne Murphy on June 1, 1953, at Our Lady of the Holy Rosary of Pompeii Catholic Church in Kenosha. They were happily married for forty-one years until her death parted them on March 25, 1995. They had six children, Charles Imbrogno, John (Darcy) Imbrogno, Yvonne Imbrogno, Carmella (Joseph) Richards, Genevieve (Ben) Pringle and Rudy (Melanie) Imbrogno. He leaves behind thirteen grandchildren, twenty-two great-grandchildren and one great-great-grandchild.
Rudy served in the U.S. Army at Fort Knox, KY from 1946-1947 in the 717th Tank Battalion. He then worked at Great Lakes Naval Base as a Civil Service Technician on U.S. Army Nike Ajax Missiles for twenty-eight years. He also worked at Fort Sheridan as the night shift Supervisor on military missile equipment where he received numerous awards.
Our sweet dad was kind and compassionate. He was also stern, when he needed to teach us a lesson. Dad was such a hero, as he helped so many people. In my most difficult moments, his smile and laugh always cheered me up!
The Lord could have taken him so many times, in so many ways. He will always be missed so much, by all of us.