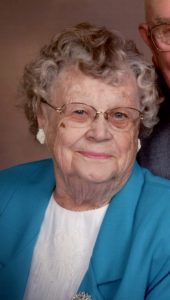 Elsie June was born on June 28, 1929 to Adolph and Lydia (Schoenborn) Miller in Flint, Michigan. She was baptized on August 9, 1930 and confirmed on April 18, 1943. She grew up amidst Guernsey cows grazing timothy meadows on the Miller farm near Medford, Wisconsin. She died on June 29, 2021 at 92.
Elsie graduated valedictorian from Medford High School in 1947, but we never really knew what her dreams were.
Elsie married Leonard Splett, from Almena, on April 17, 1949. They were a life-long farming family. Elsie was as agile at raking hay as feeding the haying crew. We’d like to see her life through a Norman Rockwell lens, and we’d always wanted to think she was happy. That probably wasn’t her life.
She was a testament of the farm women corps. They belonged to an era – born in the depression, served the home mission of WWII, stayed unsung during the go-grow 70’s of farming, and stood shoulder-to-shoulder during the dying of family farms in the 80’s. They were steady, sturdy, guarded farm women.
Patches on patches on work pants, and patch-work quilts for kids and grandkids and children in foreign lands was her practical artwork. In the Lutheran church basements of Zion in Turtle Lake, and later, Salem in Barron, she prepared church meals, and later she hovered over young ladies preparing church meals. As diligently, she prepared Sunday worship bulletins at Zion, and taught the church children stories from the Bible. She was strong in faith, but we didn’t know her favorite hymn or Bible verse.
Dementia erased each day, but memories survived. Elsie is survived by her husband, Leonard; children, David (Barbara), Nate (Becky), Rachel (Bruce) Stafne, and Kevin (Kathy); grandchildren, Matthew (Joni) Splett, Brianne (Logan) Anderson, Kaela (Jake) Sacquitne, Brice (Alyssa) Stafne, Molly (Matt) Jaschen and Kelton Splett; great-grandchildren, Amelia, Mallory and Clayton Anderson, Grayden and Audrey Splett and Caleb Jaschen; brother-in-law, Elmer (Karen) Splett; nieces and nephews; and also, Sam and Nancy Nelson.
She was preceded in death by her parents; sister, Edna Liske; and infant brother.
A funeral service for Elsie was held on Friday, July 2, 2021 at 2:00 p.m. at Salem Lutheran Church in Barron with Pastor Greg Becker officiating. Burial was at Wayside Cemetery in Barron.
Arrangements are being handled by Rausch and Steel Funeral Home in Barron. Online condolences can be made at www.rauschandsteelfuneralhome.com.