On Wednesday, June 23 Polk County Deputy Andrew Vitalis received his Deputy Sheriff of the Year Award at the National Sheriff’s Association conference held in Phoenix, Arizone. Deputy Vitalis was recognized for his work in solving the 7-year old cold case hit and run crash in the Round Lake Community that killed Richard Cobenais and Benjamin Juarez. Two awards are presented each year – one for merit and the other for Valor. Deputy Vitalis received the Merit Award, which is for innvoation in Law Enforcement that benefits their community. Dep 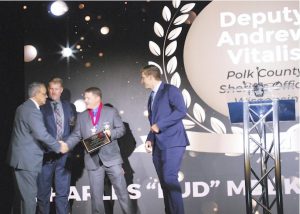 uty Vitalis was instrumental in producing the video that highlighted the cold case, resulting in the tip that brought closure to the case. Pictured, left to right, are NSA President Sheriff Vernon Stanforth, Polk County Sheriff Brent Waak, Deputy Andrew Vitalis and a Motorola representative.