The Clayton Class of 1954 met Wednesday, August 25 at 7 Brothers in Clayton for their 67-year Class Reunion. Shelby (Ludwig) Obershaw came the furthest distance, all the way from California. Those attending were, left to right: Marie (Ketz) Smead, Nancy (Brackee) Cain, Gerry Gilbertson (Doug’s wife), Rose (Walberg) Vodhaine, JoAnn (Prusak) Schramski, Shelby (Ludwig) Obershaw, Verna (Dietrich) Cotch, Shirley (Willers) Baxton and Shirley (Ludke) Lewis. All enjoed visiting with those who were attending and missed the classmates who could not make it and several who are no longner with us. 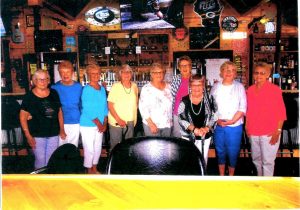