Esther was known as a great cook and baker with her rolls and donuts being especially popular.  She often came home from church to find a yard full of cars for Sunday dinner.  She loved to travel and took three trips to Germany.  She was active in the American Legion auxiliary where she served as President for many years and the Almena VFW auxiliary.  She had a strong faith in God and made sure she passed it on to all her children. She was very active in church teaching Sunday School, and involved in the Ladies Aid, choir, and altar guild.  She enjoyed bowling in Turtle Lake, Cumberland and Clayton leagues, and loved to play the piano.

Funeral services will be held at 11 am Monday, October 18, 2021 at St. Matthew Church, Almena with Pastor Preston Paul officiating. Visitation will be Sunday, Oct 17 from 4-7 pm at Skinner Funeral Home in Turtle Lake and one hour prior to the service.  Burial will be in St. Matthew Cemetery, Almena. 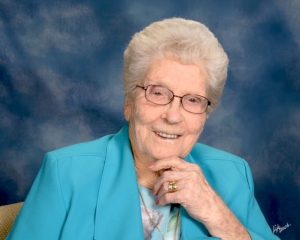