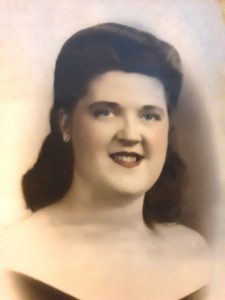 Geraldine Mary Margaret Vogt, 96, of rural Comstock passed thru the Pearly Gates Sunday November 7th after a brief struggle with her ancestors. She was preceded in Death by her husband, Edgar Vogt, her mother and father Adelaide and Joseph Joyce, her infant son David, and her infant grandson Dylan Catlin.
She was the eldest and last of her siblings, Robert Joyce, Joan Joyce and Roger Joyce. She is survived by her son Steve Vogt (Peggy), daughter Mary Vogt, granddaughter Amber Hirsch (Nick), her great granddaughter Kelsey whom she dearly loved, and her niece Joyce Jensen, as well as many nieces and nephews, great nieces and nephews, and family members.
Geraldine was originally from Saint Paul where she grew up in the Irish Frogtown District. She worked in factories during World War II and afterwards at Brown & Bigelow. She met Edgar in St Paul and they were married there two years later, when she moved to Comstock and became a homemaker. Gerri enjoyed bicycling, camping trips with her family and watching old black and white films. Gerri was also an avid people watcher who enjoyed commenting on her observations. She embraced the health food craze of the 1970s and practiced the healthy lifestyle her whole life. Her wheat germ and honey hamburgers were indeed memorable. She was born in the faith of a fine Irish family and she died in the faith.
The funeral service for Geraldine Vogt will be December 11th at 11:00 a.m. at Christ Lutheran Church Pipe Lake with visitation one hour prior. Until then, we offer up this prayer: “May the dearly Departed have been in heaven half an hour before the devil knew they were dead. Amen.”