Eldred ‘Tony’ Merle, 93, of Almena died January 7, 2022 at his home. He was born May 11, 1928, in Almena, WI to Tony and Anna (Ludke) Merle. He grew up in Almena. At the age of 15, he began hauling cattle with his dad. Soon after that he hauled cattle to South St. Paul by himself. As he got older he worked at Seegers Refrigeration and also at Waldorf Paper Co in the twin cities. He also drove school bus.

In March of 1951 Eldred entered the Army with the 73rd Battalion. Later he was in the 12th Aircraft Artillery. He served in Karlsruhe, Germany for most of his time in the service until he was discharged in March of 1953.

On February 6, 1954, Eldred married Hazel Mewes at Turtle Lake. They lived their entire married life in Almena. He worked as a bartender, and also at Koser Silo Works and eventually 3M in Cumberland, starting in 1957. Eldred retired from there in January of 1988.

In Eldred’s younger days, he was an active community member serving as a volunteer fireman. He also served on the Village Board for many years and on the Barron County Economic Development Corporation for eight years. He was a life time member of the VFW.

Eldred was an avid outdoorsman who loved to hunt and fish. He was able to take several trips to Alaska with his wife. His children spent many years with him enjoying those activities too. He was a huge Packer fan and spent many hours listening to and watching the Brewers.

Funeral services will be held at 11:00 a.m. Saturday, January 15, 2022 at St. Matthew Lutheran Church in Almena with Pastor Preston Paul officiating. Visitation will be from 10 – 11:00 a.m.. Family requests that masks be worn at the service.  A private wake and burial at the Northern Wisconsin Veterans Memorial Cemetery will be in the spring.

Eldred’s family would like to thank the Hospice Team and Dr. Ankarlo for their wonderful care during this difficult time.

Skinner Funeral Home of Cumberland is serving the family. 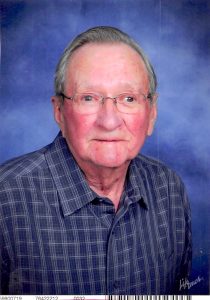