Ede was first and foremost a dedicated mother and a hard-working farmer’s wife.  Ede spent numerous hours working in the barn and fields as well as maintaining an immaculate lawn.  She especially loved being a grandmother.  She took individual time with each grandchild during the summer months, leaving each with many special memories of time spent with her on the farm.

Edith was committed to a life of discipleship.  She was a long-time member of St Matthew Church in Almena where she was baptized, confirmed, and married.  She spent many years as a devoted Saturday School teacher.  She would always find time to provide rides to as many neighborhood children as could fit in her car.  She lived her faith and her greatest joy was that her children, grandchildren and great-grandchildren know God.

Ede spent several years working in the Turtle Lake School cafeteria and made sure no child went hungry.  After retirement from the school district, she spent many years as a site manager for the Senior Center, because “she loved those old people!”, and then again retired at 80 years young

She was preceded in death by her parents: Cecil and Eda Garling; husband: Gordon Krecker; grandson: Justin King; and brothers: Richard and Robert Garling.

Funeral Services will be at Skinner Funeral Home in Turtle Lake at 11:00 a.m., Wednesday, March 23 with Pastor Greg Becker officiating.  Visitation will be one hour prior to the service and burial will be for immediate family. 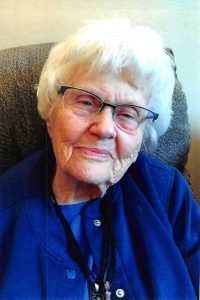