She married Jack Schabell on April 3, 1948 and moved to Ely, MN. They later divorced.  She tended bar in the Ely area for several years and later would tell folks that up in that country ‘men are men and women are proud of it.’  In 1968 she married Owen Childers and together they made their home in Peoria, IL.  After Owen passed in 1983, she moved home to the family farm in Turtle Lake where she cared for her parents until her mother’s passing in 2010.  She was a social person and over the years was a member of the Moose Club and American Legion auxiliaries.  She was a past President of the AMVETS auxiliary in Peoria and the VFW Auxiliary in Almena.  She was particularly proud of her association with veterans’ groups, calling the vets “My Veterans” as though they belonged only to her.  She was a caring lady and loved playing cards, traveling and was proud to be part of a family with several living generations of women.

Services will be Saturday, March 26, 2022 at 1:00 p.m. at the Skinner Funeral Home, Turtle Lake, with Pastor Mark Woeltge officiating.  Visitation will be one hour prior to the service and burial will be at Lakeview Cemetery. 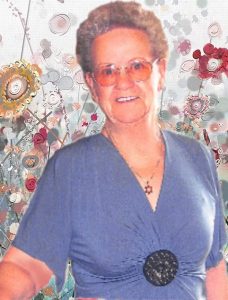