Clarence Muschik, age 103, of Clayton, WI, passed away on April 28, 2022, at Golden Age Manor, Amery. He was the husband of Arcenia (Moravitz) Muschik who preceded him in death on March 9, 2015.  They were married for 74 years and had two children.

Clarence was born March 5, 1919 in Barron County, WI and was the youngest of five children of Mathias and Clara (Bruss) Muschik. After his father passed in 1941 he took over the dairy farm. He retired in 1987 to Rice Lake, WI and lived in his home until moving to Golden Age Manor at 101 years of age. In retirement he enjoyed gardening, returning to the farm for repair work, maintaining his old tractor, and just being on the land where he grew up.

Graveside services were held on Thursday May 5, 2022 at 11:00 a.m. at the Lakeview Cemetery in rural Turtle Lake, Wisconsin. There was a short gathering time for the half hour before the service.  The Williamson-White Funeral Home and Cremation Services assisted the family with arrangements.  You may sign an online guestbook at www.williamsonwhite.com. 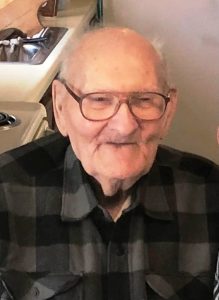