Gary Picknell, age 79, of Barron, passed away peacefully at home on Monday, October 10, 2022 after a long battle with declining health.

Gary was born to Walter and Dorothy (Hubbard) Picknell on February 25, 1943 in Barron.  Gary was one of 8 children, Wayne, Lois, Harry, Robert, Barbara, LeRoy, and Marilyn.  Gary attended school in Barron and Rice Lake before moving to Iowa and graduating in the class of 1962, from East High School in Waterloo, Iowa.

He was married to his wife of 60 years, Barbara Crisman on December 1, 1962. Together they raised 5 children, Scott, Tracy, Cory, Jason and Brooke.  Their son, Scott passed away at the age of 5, 54 years ago to the day of Gary’s passing.

Gary worked for John Deere while in Iowa.  After returning to Wisconsin, he farmed on a dairy farm in Turtle Lake. He then worked for Koser Silo Works in Almena, before starting a career with Cenex-Land-o’-Lakes in 1979.  He held various positions at the company ending in sales before his retirement.  He somehow always managed to find a way to be on a sales trip around Lambeau Field at least once a year to attend a game and make some friends at the tailgate parties. Retirement didn’t slow him down, he kept himself busy with all kinds of projects and learning new skills. Often saying he was busier being retired than he was when he was working.

Gary will be fondly remembered by family and friends alike.  He was the very embodiment of “Midwest nice.”  He was always ready to drop everything and help out family and friends with whatever they needed.  His many skills in many areas were always welcome to those in need, always done with a big smile and a can-do spirit.

He will be remembered as a jack-of-all trades.  He was a skilled and accomplished carpenter, electrician, mechanic, from construction all the way down to knowing where exactly to hit a stubborn pump switch with a hammer to get it working again.  He spent many hours repairing equipment of both friends and family and had a whole shed of antique tractors he never got quite around to restoring.  There was always another project waiting.

In addition to his construction and repair skills, he was also handy in the kitchen.  Over the years he acquired a whole array of tools for butchering livestock and game.  Deer season was one of his favorite times of year.  Early morning breakfasts in the “Packer Room” and a whole week of family and friends visiting.  He cherished that time, especially with his beloved grandsons.  He loved passing on the techniques and traditions of hunting season to the next generation; and sharing stories, usually funny ones, of seasons past.

In addition to all of his sausage making, smoking, grilling, jerky making and meat processing related activities; he also was the go to guy for sauerkraut making tips, even holding several well attended classes on the activity.  One year, having over 300 gallons of the stuff fermenting in the Packer Room. Who has a dedicated two station kraut cutting table?  Gary did.  He even experimented with KimChi, and other fermented recipes from around the world.

The Packer Room, in addition to being the canning, kraut making, and meat processing space, also hosted many parties for friends and family.  From baking Christmas cookies to watching his much loved Green Bay Packers, it seems like he could always be found there working on, or planning some new project.  Usually with friends and family around sharing in some smiles.  The Packer Room was always a welcoming place, overseen by a man with a welcoming heart.

He will be missed greatly by family and those lucky enough to call him a friend.

Burial will be at Wayside Cemetery in Barron.

Arrangements are being handled by Rausch and Steel Funeral Home in Barron.  Online condolences can be made at www.rauschandsteelfuneralhome.com. 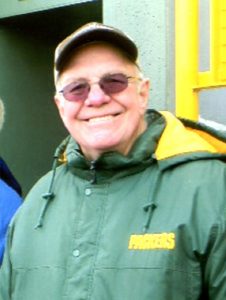