For the first time since 2000, the Laker volleyball team has captured the Lakeland Central Conference title outright following wins over Clear Lake and Northwood this past week. In 2015 the title was shared between the Lakers and the Clayton Bears.
After defeating the Clear Lake Warriors Tuesday night at home (both teams won on their home court this season), securing at least a share of the title, the Lakers traveled to Northwood Thursday night, October 15, and set the Evergreens down in three straight sets to claim the gold. 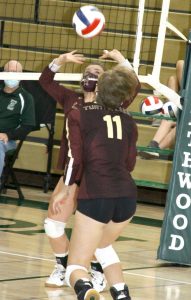