Marie Jeannette Williamson was born in Frederic, Wisconsin on October 2, 1928 the daughter of Alvin and Agnes Stenberg. She grew up in Amery and attended Amery High School where she was active in choir and band. She graduated from Amery High School in 1946. She married her high school sweetheart, Bob Williamson, on June 16, 1948 after Bob returned from serving in the US Navy.   They lived on Bob’s grandfather’s farm for a short time until moving to the twin cities for Bob to attend mortuary school. Marie worked as a secretary for an insurance agency, and helped with a lot of school work for Bob. They returned to Amery where Bob went to work for Stenberg Furniture and Undertaking.
In 1951 the first of four children was born. Marie was kept busy raising the family. She was a member of First Lutheran Church and sang in the church choir for many years. Marie enjoyed bowling and went to several state tournaments over the years. She was active in Eastern Star and served in many of the officer’s roles. When she and Bob purchased the funeral home from her father she became a big part of helping with the business, fielding the phone calls and doing whatever other jobs that needed to be done.
Marie kept up the home schedule and got kids where they needed to be, when they needed to be there. And once the kids were in school activities she attended every event possible. She was in the stands cheering for the athletic teams or sitting proudly watching musical or play performances. This continued into her later years as she watched her grandchildren and great grandchildren participate in many things.   As weddings began to happen she was proud to watch the next generations get married and start their lives as a new family.
Marie was a trooper with outdoor activities. She took part hunting at Sand Burr Acres, fishing and riding for miles on snowmobiles with family and friends.
Marie and Bob were very active members of the Apple River Drifters, a camping club, and enjoyed many trips around the US and Canada with their friends. They spent some winter time with the motorhome camping at Circus Circus campground in Las Vegas. When traveling with the motorhome became difficult they purchased a home in Apache Junction, Arizona. They spent many enjoyable winters there with great friends.
When being away for winters was their routine they also purchased a home at Pondhurst in Amery which made upkeep easier for them. After Bob’s death in 2017, Marie moved to Riverbend Assisted Living. She was still able to get out and enjoy activities with family and friends. As the rigors of Parkinson’s disease started to take their toll it became too difficult to live independently, so she moved to Willow Ridge Nursing Home in December of 2019. She participated in as many of the activities there as she could, and still continued to get out for church and family gatherings.
Marie experienced a medical emergency on Monday, February 24, 2020 and was taken to the Amery Hospital. With no alternatives for care she was placed on comfort care and that evening passed away surrounded by her loving family.
Marie was preceded in death by her parents and husband Bob. Surviving family members include her children: Lou (Kathy) Williamson, Chuck (Cheryl) Williamson, Jon (Karen) Williamson and Diane (Tim) Crawley; grandchildren: Gehrig (Michelle) Williamson, Steve (Tressa) Williamson, Jeremy (Erin) Williamson, Amanda (Tony) Aizpurua, Carly Williamson, Marty (Brittanie) Williamson, Wendy (Anthony) Williamson, Curtis (Amanda) Williamson, Paul (Amy Jo) Lundgren, Andy (Abby) Lundgren, and Amy Lundgren; great grandchildren: Ella, Grace, Anna, Luciana, Mateo, Laken, Hans, Elin, Gavin, Jenna, Brady, Nola, Quinn, and Olin. She also leaves one sister Charlotte Christenson and many other relatives and friends.
Funeral Services were held at 11:00 a.m. on Saturday, February 29, 2020 at the First Lutheran Church in Amery with Pastor Tim Bjorge officiating. Interment will take place immediately following the service at the Amery Cemetery.
To sign an online guest book and view a video tribute please visit www.williamsonwhite.com
Arrangements were entrusted to the Williamson-White Funeral Home and Cremation Services. 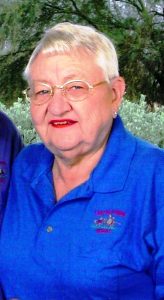