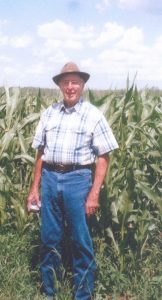 James (Jim) Kittelson of rural Turtle Lake passed away March 15, 2020 at the VA Medical Center in Minneapolis.
James served on active duty in the US Army for fourteen years.  After active duty he worked for FabricTec as an electronics inspector for a few years before buying the family farm from his father.  He was proud of his farm, receiving one inspection report with no deficiencies noted, a very rare occurrence.
After retiring from farming he was an active volunteer with Meals on Wheels and the Barron County Museum. Jim was the past commander of the Almena VFW post and was commander of their honor guard for many years.
He is survived by his sister-in-law, Lois Kittelson of Almena, twenty nieces and nephews, and many cousins and friends. He was preceded in death by his parents, Alvin and Ada Kittelson, brothers Charles Kittelson, Harvey Kittelson, and sister Delores Finke.
He will be buried at the Northern Wisconsin Veterans Cemetery on March 20, 2020.  Due to the ongoing health crisis, military honors will be rendered at a later date.  The family will also hold a celebration of his life later this summer.
Skinner Funeral Home of Turtle Lake is serving the family.