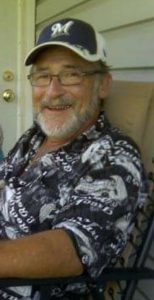 Harold William Seever 65 of Brownsville, TX passed away on March 21, 2020, at Valley Regional Hospital, He was born on October 27, 1954, to Norman and Beverly Seever in Rice Lake. Harold attended and graduated from Turtle Lake High School in 1973 and went onto study Sicologia at Minneapolis Community technical college, he also studied Applied Science at Alexandria technical college in Alexandria, MN. Harold proudly served in the US Army.
Harold worked as a facilities maintenance technician at 3M from 1976 to 2010 when he retired after thirty-four years of service. Harold was a huge Green Bay Packers fan and he also loved the Milwaukee Brewers. In his spare time, he loved going fishing, playing golf and he also loved going four-wheeling with his sisters and their spouses.
Harold is survived by his daughter Erin Seever of Neenah, WI; his son, Steven (Tegan) Seever of Clayton, WI; sisters: Pam (Danny) Tornio, Brenda (Kevin) LaBlanc and Lisa (George) Allen. He is further survived by Sue’s children: Amy, Rick and Kevin; and two grandchildren; by Patrica’s children: Ryan, Anthony and Rachael, and six grandchildren. And last but not least his very own grandchildren, Parker, Emma, Lenah, Katelyn, Kennedy, Austin, Brecken, Gabriel and Bianca along with extended family and friends. Harold is preceded in death by his parents, Norman and Beverly Seever, his wife Sue Seever and his wife Patricia Seever and his Daughter Carolyn Seever.
Harold will be deeply missed by all his family and friends!
We love you Dad!
Funeral services will be held at a later date.