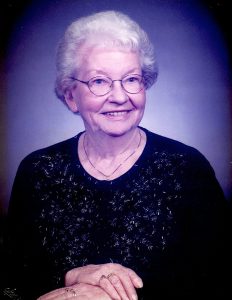 Evelyn Deloris (Stafne) Singerhouse, age 99, of Prairie Farm, passed away on Thursday, August 20, 2020 at Pioneer Nursing Home in Prairie Farm.
She was born on February 22, 1921 at home to Tonette and Thomas Stafne with a mid-wife in attendance.  She was the youngest of 6 sisters and 1 brother, Anna, Edna, Jennie, Mabel, Alice and Clifford who all preceded her in death.
Evelyn attended Jones Creek School for eight years when her formal education ended.  She lived at home, occasionally helping out in neighborhood homes when needed.  She worked at the Farmers Store in Prairie Farm before going to Milwaukee and working at Cutler Hammer during the war, making controls for submarines.
Her fiancé, Otto Singerhouse of New Richmond, was serving in the Naval Construction Battalion in the Pacific.  When Otto returned after serving 33 months, without leave, they met in Minneapolis and were married the day after on August 4, 1945.  The war ended when he was on leave.  Otto then reported to Great Lakes Naval Station and was presented with an honorable discharge.
They began their married life on the farm with her parents, farming on shares.  Five years later, after starting a family, they bought the Ole Moe farm on “A”, 3 miles west of Prairie Farm where they lived for 54 years.  Their children all attended school in Prairie Farm and graduated from Prairie Farm High School.
Otto and Evelyn celebrated their 50th anniversary in 1995.  Otto died of cancer in 1999.
Evelyn is survived by her family:  Donald of Prairie Farm, Karen Kahl of Prairie Farm, Paul (Marita) of Germany, Diane (Kelly) Stevens of Menomonie, Scot (Stephanie) of Menomonie, Susan of Chippewa Falls, Mary (Roger) Hepokoski of Elk Mound; many grandchildren and great-grandchildren.  Also surviving are nieces, nephews, sister and brother-in-laws and a host of friends.
She was preceded in death by her parents; husband; an infant daughter, Ruth Ann in 1949; son-in-law, Robert H. Kahl; daughter-in-law, Beverly K. Singerhouse; grandson Jason Singerhouse; her five sisters; her brother; parent-in-laws; and a beloved God child, Eileen Thompson of Spokane.
A private graveside service for Evelyn will be held at Akers Cemetery.
Arrangements are being handled by Rausch and Steel Funeral Home in Barron.  Online condolences can be made at www.rauschandsteelfuneralhome.com.

CELEBRATION OF LIFE FOR CARL MOLLS