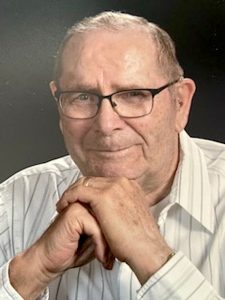 Steve Curtis, age 85, died peacefully on November 6, 2020 of Parkinson’s Disease surrounded by family.
Steve was born on April 22, 1935 on the family dairy farm near Clayton, Wisconsin.  He was the 4th child of 7 born to Steve and Marie Curtis.  He graduated from Clayton High School and earned a BS degree in agriculture education from Wisconsin State College, River Falls.  Right after graduation, Steve married his sweetheart, Marilyn Grethen on June 22, 1957.  Together they had 4 daughters.  Steve worked for GTA in St. Paul as a grain inspector and later transferred to Great Falls in 1969 to managed the grain lab.
Steve bowled for many years at the Elks Club on their Tuesday night men’s league and was a long-time volunteer at the St. Vincent De Paul food bank.  He was also an avid walleye fisherman.  He was a member of Walleyes Unlimited where he was a volunteer and treasurer.  He was honored with the 2016 Hall of Fame Award for his outstanding service and dedication to the club.  He shared his love for fishing with his wife, friends, daughters and grandchildren.  His annual fishing trip to Canada with his brothers was the highlight of his summers for many years.   Steve and Marilyn started traveling the globe in 1977.  Their travels took them to many stops in the Caribbean, Hawaii, Mexico, Brazil, Norway, Luxembourg, Greece and Mediterranean Sea, Alaska, Boston, New York and Canada.
Steve is survived by his wife, Marilyn, his daughters Julie (Jim) Armstrong, JoAnn (Kevin) Flaherty, Jean (Jack) Stimac and Jackie (Kent) Sheble.  He was a proud grandfather of nine grandchildren – Sarah, Becky, Sean, Katherine, Megan, Matthew, Mark, Mariah and Kassady – and a great-grandfather of nine – Reagan, Ryan, Annabelle, Jayden, Leo, Seattle, Matthew, Kiley and Angela.  He is survived by his brothers – Jack (Iris), Bill (Carol) and Bob and his sister-in-law Bev Curtis.  Steve was proceeded in death by his parents, Steve and Marie Curtis, brother Jim, Ted and his wife Beulah and his sister Rosemary and husband Warren Bittorf.
In lieu of flowers, please consider a donation to Benefis Peace Hospice of Great Falls or a charity of your choice.
Steve’s services were held at St. Ann’s Cathedral in Great Falls Montana on November 13, 2020.