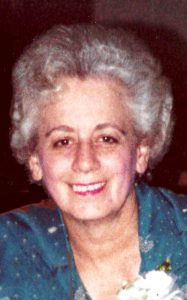 Marjorie Evelyn Schaumburg passed away peacefully at Willow Ridge Healthcare in Amery, Wis. on Friday, January 1, 2021. She was 99 years of age.
Marjorie was born in Crookston, Minn. on February 6, 1921 to Clarence M. Stout and Hannah (Hulst) Stout. During her high school years in Crookston, Marge was an award-winning athlete, excelling in basketball and track and field. Her special gift, however, was music. Blessed with an extraordinary soprano voice, Marge was a frequent soloist and choral singer in the Crookston area. After high school, Marge attended St. Luke’s Hospital School of Nursing in Fargo, N. Dak.  She married Egis (“Ed”) Warmanen in 1942. The couple had two children, Judith and Richard. Marge was a full-time mother when her children were young. They were her joy. She was their mother and their best friend. She was always there to listen, to play a game, to answer their questions. And along the way, Marge taught them how to read and how to write cursive by the time they were four years old and, most important, grounded them in the religious faith that would sustain them throughout their lives. It’s no accident that Marge’s kitchen became the gathering place for her children’s friends when they became teenagers.
In 1952, after living in various communities in southern Minnesota, Marge and Ed settled down in Austin, Minn., where Marge worked as a surgical nurse at St. Olaf Hospital. Marge was also very active in Our Savior’s Lutheran Church in Austin. She was president of the Altar Guild, a Sunday School teacher, a youth counselor and a soloist with the church choir. In December 1966, Marge and Ed relocated to the Twin Cities area, where Marge accepted a newly created position as purchasing agent for the operating rooms at the University of Minnesota Hospitals.  Ed passed away in December 1972.  In July 1978, Marge married Donald Schaumburg of St. Paul, Minn. After Marge retired from the University in February 1983, she and Don spent several years traveling the U.S., visiting both popular tourist spots and off-the-beaten-path locations. Marge and Don bought property on White Ash Lake near Balsam Lake in 1980 and spent many a weekend remodeling their home there – when they weren’t fishing, enjoying the restaurants and supper clubs in the Balsam Lake area or birdwatching. Don passed away in December 1988. Marge and her daughter Judy moved to White Ash Lake permanently in 1990. Marge was an active member of Redeemer Lutheran Church in Amery, serving as Ladies Aid vice-president,  as the first co-chair of the congregation’s funeral committee and as the first co-chair for Redeemer’s annual fall Swiss steak dinner.  Marge became a resident of Willow Ridge Healthcare in Amery in October 2016 due to a serious injury suffered in a fall.
Marge was preceded in death by her parents; her husbands, Ed and Don; her son, Richard; her stepfather, Walter (“Ray”) Nelson; her brothers-in-law, Philip Warmanen and John Swingdorf; and her sister-in-law, Signe (Warmanen) Lithio.
She is survived by her daughter, Judith Warmanen of Turtle Lake, Wis.; her granddaughter, Sarah Warmanen of Jasper, GA; her grandson Jesse (Rachel) Warmanen and her great-grandchildren, Evie and Charles of Euless, Tex.; her brothers, Rev. Richard Nelson of Weatherford, Tex. and Rodger (Myra) Nelson of Northglenn, Col.; her sister, Marshea Swingdorf of Shoreview, Minn.; many nieces, cousins, other relatives and friends. She will be dearly missed by all who knew and loved her.
Due to the Covid-19 pandemic, no visitation or memorial service will be held. A family-only graveside interment service will be scheduled at Fort Snelling National Cemetery at a later date.
To sign an online guest book and view a video tribute visit www.williamsonwhite.com.  Arrangements were made with the Williamson-White Funeral Home and Cremation Services of Amery.