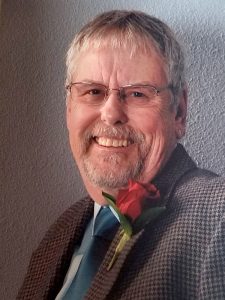 David Michael Johnson, 72, of Turtle Lake died Friday, January 15, 2021 at his home surrounded by his family and friends. He was born September 29, 1948 in Duluth, MN to Merrill and Lorraine (Sundby) Johnson.
He was married in Las Vegas, NV on April 1, 2010 to Annie Ford.
David was a true hand-i-man and a jack-of-all-trades; if there was an issue with something, he could fix it. He took pride in the work he did inside of his home; especially the wood working. David loved his family, his dogs, and the peace and quiet of his lake home.
He is survived by his wife, Annie; children: Lea Johnson and Mike Johnson; step-children: Daniel (Tiffany) Strenke, Gerald Strenke, Susanna (Michael) Oliver, Dionna (Rob) Rivas, and Gregory Ahlm; grandchildren: Mykayla and Mykel; and many other family and friends. David was preceded in death by his parents, Merrill and Lorraine; and brother, Bill Johnson.
Funeral services were held at 5:00 p.m. Monday, January 18, 2021 at Skinner Funeral Home – Turtle Lake.
Skinner Funeral Home of Turtle Lake is serving the family.