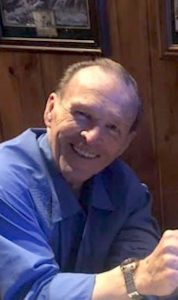 Allen Joseph Leisz passed away on the evening of Saturday, January 16th, 2021 at the Mayo Clinic Health System in Eau Claire, Wisconsin from a lengthy illness of congestive heart failure. He was 75 years old.
Allen was born on October 22, 1945, the fifth of six children of Ione Marie LaMere Leisz and Michael Leisz. He grew up in the Village of Turtle Lake and attended Turtle Lake schools. Allen went on to work at the Turtle Lake Creamery, Clayton Cheese Factory, and in construction in the Twin Cities.
A benefactor of local organizations and those in need, Allen supported the Turtle Lake Public Library with a financial donation towards its recent relocation. He supported the Turtle Lake Museum and other causes.  He also drove citizens to local polling sites on election days.
Allen’s generous donation to the 2018 Leisz Family Reunion enabled purchase of a new headstone for the family’s matriarch, Anna Maria “Mary” Schmidt Leisz (1840-1918), an early settler of Turtle Lake. Her son Frank Leisz was Allen’s grandfather, who passed away on Allen’s 4th birthday in 1949.
Allen was well known to many Turtle Lake residents. He was a gregarious extrovert who never hesitated to tell a story or strike up a conversation with others. Allen especially enjoyed the two Leisz family reunions in 2002 and 2018, where he met over 100 cousins from all over the country.
Allen was a cornerstone of planning the Leisz family reunions, given his in-depth knowledge of Turtle Lake, its history and citizens. His memory was sharp as a tack and he was called upon to share these memories in a video documentary project by Turtle Lake grade school students to record the history of the village.
Allen was preceded in death by his parents and brothers Jerome Paul Leisz and Laurent Michael Leisz, and former spouse Deanne. Surviving Allen are sisters Mary Kay Leisz Ramnarine, Arlene Marie Leisz Nelson, and Joann Theresa Leisz Sollman, plus many nieces, nephews and cousins.
Allen will be laid to rest at St. Ann’s Cemetery in Turtle Lake. Professional services are provided by the Skinner Funeral Home.