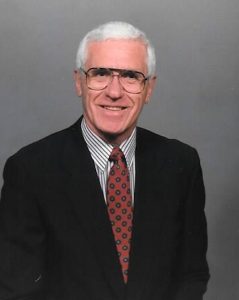 Robert F. “Bob” Koser, 88, went to be with the Lord peacefully in his sleep early Sunday morning, January 24th, 2021 at his home in Moon Lake Estates in Rice Lake. Bob was born February 20, 1932 at the height of the depression in Almena to Herman and Millie (Kunkel) Koser. The youngest of three children, he grew up attending Almena Elementary School and then graduated from Barron High School in 1950, where he was the captain of the 1950 football team and had lead roles in musicals and choral performances.  He attended UW-Superior and again had lead roles in musical performances until he was drafted into the Army in 1953.
In 1954, Bob married Marianne Taylor of Superior and the couple moved to Almena, where Bob joined his father Herman and his brother, Ralph owning and operating Koser Silo Works and General Contractors.  Founded in the early 1930’s, Koser Silo operated as a nationally recognized leader in the concrete silo industry.  Bob held several patents that helped revolutionize the industry and was also elected Chairman Of The Board of the International Silo Association. Koser Silo constructed up to 200 silos a year over a thirty year period ending in the early 1980’s.  Hundreds of Koser Silos still dot the rural landscape throughout Wisconsin and Northeast Minnesota.  It was during this time that Bob served many years on the Board Of Directors at the Barron Hospital, overseeing the building expansion project that became the modern day medical facility in Barron.
In 1983, Bob entered the insurance industry, primarily with Aid Association For Lutherans (now Thrivent) in the Eau Claire region.  He received many awards as a top producer in his agency and district in his nearly 10 year insurance career.
In 1992, he joined his son Tom in the radio business as his Station Manager at WRLS Radio in Hayward and a shareholder with Tom’s stations –  WJMC / WAQE / WKFX in Rice Lake.  After a 10 year career in radio, Bob retired to his lake home on Upper Eau Claire Lake in Barnes, WI.  Bob and Marianne enjoyed a great retirement, working in his beloved shop as a master wood craftsman and golfing in the summers at the lake, followed by warm winters at their home in Tucson, AZ.  The couple moved to Moon Lake Estates in Rice Lake in 2019.
He is widely known for his Christian  ministry that included sharing his faith and story of his personal relationship with Christ at many area churches.   Along with Marianne, he founded and led the ‘New Song’ Christian Musical Group made up of many teen-aged singers who shared their faith in song and ministry at area churches in the mid 1970’s. Bob was an avid hunter and sportsman, with many Canadian duck hunting and fishing trips; South Dakota pheasant hunting, Alaska salmon fishing, Texas goose hunting and over 60 years of Wisconsin deer hunting with his many family members.  There was no bigger Packer or Badger fan in all of Wisconsin! His warm, friendly personality and infectious smile made him a memorable favorite to nearly all who came in contact with him.
He is survived by his wife of sixty-six years, Marianne; one son, Tom Koser (Dianne) of Rice Lake; a daughter, Kathryn Cairy (Joel) of Burnsville, MN; son-in-law Jim Johnston (Theresa) of Birchwood; foster daughter, Corey Fischer (Walt) of Proctor, MN;  a sister, Myrt Ruse (Paul) of Coldwater, MI; eight grandchildren; eleven great- grandchildren; many cousins, nieces and nephews.  He was preceded to heaven by his beloved daughter, Nancy in 2007.
A Celebration Of Life Service will be held at Noon on Wednesday, February 10th at Shell Lake Full Gospel Church in Shell Lake (masks encouraged) for those wishing to attend.  Visitation will be Tuesday, February 9th from  5-7 p.m. at the Skinner Funeral Home in Rice Lake and at the church two hours prior to the service on Wednesday. Pallbearers will be Bob’s grandson’s – Andrew and Luke Johnston, JT and Taylor Koser, Christian Cairy and David Yentsch (grandson-in-law).
Memorials are encouraged and will be directed by the Koser family to Mercy Smiles Home of Favor orphanage in honor of Bob and Marianne’s daughter, Nancy Johnston.