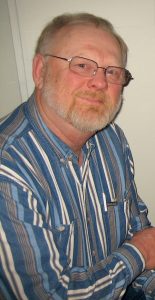 Ronald ‘Ron’ Howard Greschner, 74, of rural Turtle Lake passed away unexpectedly at home on June 20, 2021. Ron was born on October 4,1946 in Rice Lake to Joseph and Bertha (Scheps) Greschner.
Ron attended DeVry technical college in Chicago, IL for electronics after graduating from high school in 1965. He served in the Army in Vietnam. He was drafted and served as a Sergeant in the Army 1st Infantry Division in gunnery from August 1967 – March 1969. Shortly after coming home, he moved to Marion, IA to work at Collins Radio where he met and married Jane Standley on September 4, 1971.
Ron moved back to Turtle Lake in 1971 and started working for Melby Trucking as a driver spreading lime and hauling gravel. He started Greschner Trucking in May 1972 after purchasing a truck from Melby Trucking. He continued hauling lime, sand, gravel and rock for many people in Barron County and the surrounding counties until his retirement in 2005. He also worked for Almena Township in the winter months and after retiring from Greschner Trucking he worked for Almena Township full-time until he retired in 2018. Even after retirement he couldn’t stop driving truck, and he continue to plow for Almena Township and he also helped out at Scheps Dairy driving truck when needed including this last fall.
He enjoyed spending a lot of time on the lake, regardless of the time of year. Ron loved to fish and went on annual fishing trips to Canada. He also spent many a night on the lake towing his kids and the neighborhood kids behind the boat to ski or to tube. When Mark joined the Chetek Hydro-Flights, Ron drove one of the many boats needed for the show.
Ron enjoyed hunting deer and pheasant hunting. He went out west on a couple of different trips to hunt with friends and family. Riding on his motorcycle or his trike was one of his favorite past times later in life. He put on hundreds of miles with friends and family driving all over Wisconsin and Minnesota.
He enjoyed spending time with his grandkids and his four-legged grandkids. He was also known to go out to eat every Friday night with Ruth until COVID -19 pandemic hit. Ron knew everyone, and everyone seemed to know him. He was always willing to lend a helping hand.
Ronald is survived by his two children: Shelly (J) Wynia, Mark (Carissa) Greschner; three grandchildren: Bret, Garret, and Carter Greschner; a brother: Greg (Robin) Greschner, ex-wife: Jane Standley, special friend: Ruth Morton; and many aunts, uncles, cousins, other family and friends.
He was preceded in death by his parents: Joseph and Bertha Greschner.
Visitation will be at the Skinner Funeral Home – Turtle Lake on Thursday, June 24 from 4:00 – 7:00 p.m. Military honors and interment will be at the Northern Wisconsin Veterans Cemetery on Friday, June 25 at 10:00 a.m.
Skinner Funeral Home of Turtle Lake is serving the family.