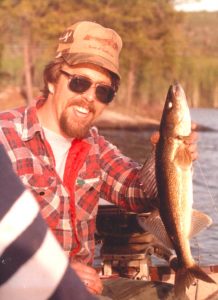 Scott Stary, 68, of Turtle Lake passed away at home with his family on July 1, 2021 after a long battle with cancer. Scott was born on March 11, 1953 in Rice Lake, Wisconsin to Stanley and Jean (Cornwall) Stary.
Scott graduated from Turtle Lake High School in 1971. He married Margie Gall in 1973 and together they had 3 children. He worked at the family owned Cornwall and Stary Hardware store from 1974 until he retired in 2011. Through those years he became known as an excellent arrow smith, tin cutter and fixer of just about anything.
Scott was an avid hunter and fisherman. Throughout the 1980’s he won countless archery competitions and was ranked #2 in the state of Wisconsin for recurve barebow. He created an archery range trail throughout his 20 acres of land where he invited friends to “shoot night” every Thursday throughout the summer and fall. He spent time hunting in Ino, WI, fishing in Canada and throughout the Turtle Lake area.
He took pride in growing, harvesting and canning vegetables from his garden each year. He spent countless hours in the woods picking berries, hunting morel mushrooms and soaking up nature.
Scott had a true passion for cooking for his family and friends. He was known for his Horseradish, smoked fish, venison jerkey, potato dumplings, Italian sausage, pickles and his Carolina reaper peppers.
He adored every moment with his friends, family, pets and especially his three grandkids. He loved having the house filled with laughter and passed down many traditions to his children and grandchildren. To all who knew him, Scott was a man loved by all. In his final days, he was showered with visits, phone calls and memories from friends and family. He told stories, made jokes, laughed and pulled pranks right up until the very end. He will be greatly missed.
Scott is survived by his wife, Margie; children Mark (Sarah) Stary of Saint Paul, MN; Kelly (Shawn) Leith of Poplar, WI; Amy (Derek) Johnson of Waunakee, WI; grandchildren Harper, Dawson, Emma; and his siblings: Marcia (Bill Scriber) Kalisz and John (Linda) Stary.
Scott is preceded in death by his parents Stanley and Jean Stary.